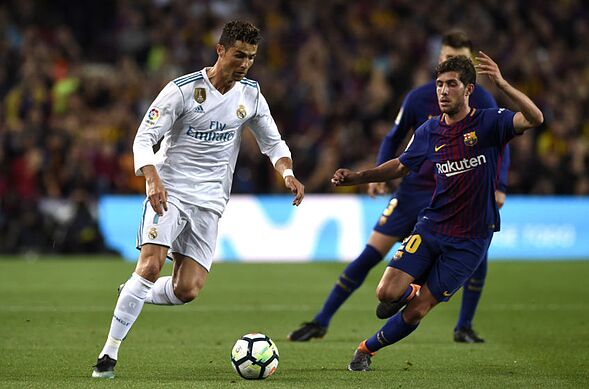 Barcelona and Real Madrid battled in an entertaining affair this past weekend. A look at the key takeaways from the game.
The final El Clásico match-up of the 2017-18 campaign came with an interesting backdrop ahead of the actual meeting, as the circumstances surrounding both FC Barcelona and Real Madrid seemed to take some of the shine off the encounter.

The Blaugrana have the league title all wrapped up, while Los Merengues are preparing for the UEFA Champions League final later this month against Liverpool.

It would be easy to write the game off as somewhat “meaningless”, but these two eternal rivals ensured that the drama and skill were at absurdly high levels throughout 90 minutes. The game started with a furious pace, and the scoring came

A fantastic cross from Sergi Roberto (more on him later) set up an excellent Luis Suarez finish, and Barcelona were out in front. Less than five minutes later, Cristiano Ronaldo levelled the match after a superb passing sequence with Toni Kroos and Karim Benzema.

Strikes from Lionel Messi and Gareth Bale in the second half would see the match end in a 2-2 draw, as both sides battled for the winner until the final whistle. The visitors will feel significant frustration thanks to a controversial decision not to award what looked to be a clear penalty in the closing minutes.

As the season comes to an end in a few weeks for both clubs, I take a look at five things that we learned from Barcelona and Real Madrid in Sunday’s thrilling El Clásico.

Red cards always alter tactics
With little to play for other than pride in this one, many fans were unsure of what to expect from Barcelona and Real Madrid. Yes, Barca are still chasing history with an unbeaten season, but motivation may not have been as high in the Spanish capital.

Instead, it was a pleasant surprise to see both teams enthrall the Camp Nou crowd with an attacking flair and early goals. All that changed when Sergi Roberto took a swipe at Madrid left-back Marcelo just before the half-time break.

The defender was handed a straight red card, and the entire complexion of the match was modified. Suddenly, different styles and tactics were used for the remainder of the game.

The effects were seen early in the second half, as the overall pace and tempo of the match seemed to slow a bit. However, that was not the case for too long and there was still significant life left in the fixture.

While the decision from referee Alejandro Hernandez was harsh in some respects, Roberto can only blame himself for retaliating against Marcelo. Composure and attitude are critical, especially on a massive occasion like El Clásico.

Messi cannot be stopped
It is at the point now where adjectives and descriptions for Lionel Messi are completely useless, as the Barcelona magician continues to dazzle and amaze fans with his incredible skill and spectacular finishing in front of goal.

After Sergi Roberto’s red card in the first half and the scoreline at 1-1, it was no surprise to see Barca manager Ernesto Valverde look to a more defensive alignment. Philippe Coutinho was subbed off for defender Nelson Semedo, and the home side appeared set to sit back deeper and fight to keep their unbeaten league record in-tact.

For a short amount of time, that was what Catalan supporters witnessed. Then Luis Suarez fought for the ball near midfield in the 52nd minute, and played a wonderful pass forward to the Argentine number ten. From there, Messi took care of the rest.

The 30-year-old made a move to his left, and fired a shot past Madrid goalkeeper Keylor Navas to give Barcelona a 2-1 lead. Fading off the ball literally during the entire movement, it was an astonishing example of the abilities that have made him one of the all-time best footballers (and there still seems to be plenty left in his tank).

With the 2018 FIFA World Cup on the horizon next month, it is exciting to see Lionel Messi at the top of his game.

Iniesta will forever be a key figure in this fixture
Sunday’s El Clásico match-up was special for another reason, specifically for Barcelona midfielder Andrés Iniesta. The Spanish legend was playing in his final fixture against Real Madrid, after many glorious seasons at the Camp Nou.

The 33-year-old will be leaving the club after the current term, and it was emotional for fans to bid farewell to an icon of the game. Iniesta helped to lead the Blaugrana to unprecedented heights, and concludes his run with a La Liga and Copa del Rey double in 2017-18.

After a solid performance against Real on Sunday, Iniesta was subbed off for Paulinho in the 58th minute, as the home crowd offered a massive ovation for an unforgettable talent. Evidenced in the Copa del Rey final where Sevilla fans applauded him off the pitch, the midfielder was an important part of the Spanish national team’s dominance at the beginning of this decade.

As was the case when Xavi walked away in 2015, Barcelona will move on and boast multiple talented players in the middle of their line-up (for example Ivan Rakitic was outstanding in this match). But none will have the worldwide impact of “Don Andrés”.

While the Blaugrana did not secure a victory, Sunday’s wonderful tributes to Andrés Iniesta were fitting for a remarkable individual adored throughout the sport.

Zidane clearly has in sights on Kiev
It has happened before, and it happened again on Sunday. The UEFA Champions League has been in Real Madrid’s sights throughout the 2017-18 campaign, aiming for their unprecedented third consecutive title in the competition that has become synonymous with their image and existence.

In the most recent derby against Atlético Madrid, manager Zinedine Zidane made the tactical changes that would keep his squad fresh for European competition. The same took place ahead of the second half against Barcelona.

After netting the equaliser in the 14th minute, Cristiano Ronaldo was subbed off for Marco Asensio, and there were certainly some upset about this decision.

With their opponents down a man and the score level, a result was up for grabs (along with the satisfaction of ending the Cules’ unbeaten run). But it was not to be, at least for CR7 as Gareth Bale’s thunderous equaliser was a sensational moment in the 72nd minute. It is also worth noting that this strategy was almost totally successful for Zidane, especially with a penalty call that went begging late on.

The league title chase is over, and the priority for Los Blancos is the Champions League crown. However, it was still disappointing to see Ronaldo exit so early in an El Clásico battle. It is Zidane’s job to manage his players effectively so that they can achieve glory, and he carried out his duties (even if some were not happy).