Woke up sometime last week to an epic picture that had Ronaldinho, Frank Lampard and Samuel Eto’o all clutching to their individual award at the FIFA World Player of the Year gala. Barcelona was so good that year they had two players on the podium, Cameroonian was a distinct focus for me and as usual, not thowless in thought, decided to narrow it down to Nigerians who had a shot at glory in Catalonia – my roll call began, Emmanuel Amunike, probably the best left footed player the country ever seen but became a spurious version in the four miserable years at the Nou Camp. If you needed a barometer to measure it, read this, 19 appearances in that period was evident enough.

Haruna Babangida, the younger brother and poor man’s Tijani, to be fair he had a decent career from Shooting Stars and Ajax and when the Barcelona chance couldn’t be hood winked, he grabbed it becoming the second highest goalscorer in Barca B’s history with 42 goals but never really made that giant stride – zilch appearance for the first team.

Like Haruna, Gbenga Samuel Okunowo’s name sprung up, born 1 March 1979 in Ibadan, a time and place when the football craze and avid gulp for local content was in it’s peak – 15 years later, he was already commanding a starting berth with boyhood club – Shooting  Stars, Okunowo was unfazed by his age, some quarters even compared him to the best that happened to youth set up since Mutiu ‘Headmaster’ Adepoju. Although, Okunowo, was fray at the edges at times, it didn’t debar him from becoming a top player at the club with perspicacious defensive abilities and  serving as an attacking outlet when his team attacked. He simply grew in stature. 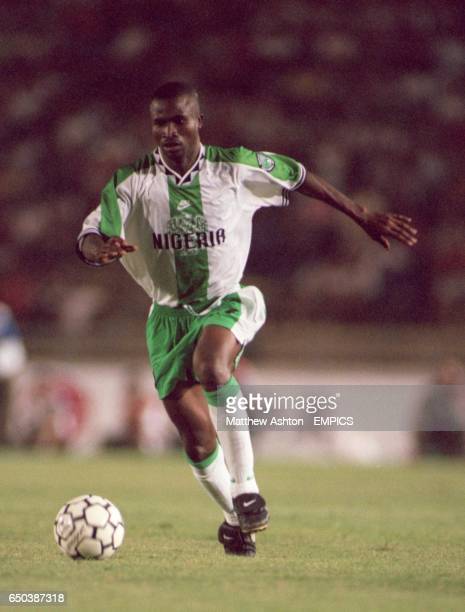 The 1997 UEFA-CAF Meridian Cup was played in Portugal and Okunowo at 18 would have a starring role. Africa was well represented in the tournament with Ghana, Ivory Coast and Guinea in the eight-team competition alongside Greece, France and Spain as well as hosts Portugal. Though the young Super Eagles would only qualify second from their group, ceding top spot in Group B to an excellent Greek side, a 2-0 victory over Portugal saw them into the final against a Spain team which included now cules legend Xavi within its ranks. A five-goal thriller was edged by Nigeria 3-2, with Okunowo one of the best players on the pitch.

Then La Masia gaffer, Josep Maria Gonzalvo was chuffed with what he saw and wanted to have him in his ranks – he subsequently got his wish after they paid Shooting a reported $18,000 for his services – within a short tenure he found himself right next to the Camp Nou big boys – the boy from Ibadan started having training sessions with Pep ‘genius’  Guardiola, Sonny Anderson, Rivaldo and Luis Figo to mention a few. In 98/99 season he had a run of 14 games, his debut coming against Real Mallorca  – for a prodigy who who just came from a different clime and culture. it was very decent. One game Okunowo would not forget in a hurry was the group stage match of the 1998/99 UEFA Champions League match against Manchester United where he was given the responsibility of marking the duo of the Red Devils strikers-Dwight Yorke and Andy Cole – game ended 3 – 3 with the Nigerian having a decent game.

During the second half of the season, his career began to splutter due to the unwanted hemlocks that comes with the game – injuries, this time it was his knee. Taking frequent jaunts to the hospital for ‘mild surgeries’ on occasions meant Okunowo began to regress as a footballer as eventual loans to Benfica and Badajoz was used to ‘test run’ his ability to come alive again – the mind was willing but his body wasn’t.  He was finally shipped out to Greek club, Ionikos where he had no appearance despite spending two years at the club, his knee got the better of him for most part and that marked the beginning of his rather frigorific, howbeit dawdle career that ranged from the Maldives to an eighth tier club in England –  Waltham Forest with grand total of appearance in that time totaling 39 appearances in 8 years across 7 teams. In-between, he made the cut to play for Nigeria at the Syndey Olympics and the African Nation’s Cup in 2000. A promising career filled with so much felicity has ended up nebulous.

If you thought his ‘cake is dough’ career was melancholic enough, months into his second Shooting Stars career at the twilight football age of 33, his house was engulfed in fire, Okunowo watched helplessly as his belongings – including his passport, European residence papers, medals, photographs and trophies – went up in flames. All he had painfully worked for had been put to ashes. “I can’t travel out of the country now because I lost my travel documents. I rely on friends and family members to cater for my family. I’m living in two of the rooms that were not affected by the fire with my family. I can’t still believe that all I laboured for 15 years could be burned in minutes. There’s no way I can get back my medals and my pictures with presidents and other personalities. It’s sad that the country is not concerned about what I’m going through”.a befuddled Gbenga Okunowo said after the fire incident. In all of this unfortunate series, their was no word to commiserate or aid from the NFF, it took an online appeal which brought Barcelona to help their ex player. Show how crabbed administratively the football is here.

Gbenga has since found a way to get his life back in order, he is currently seen in dusty pitches looking get players he could evolve into superstars – a way to ease off his dolorific career.