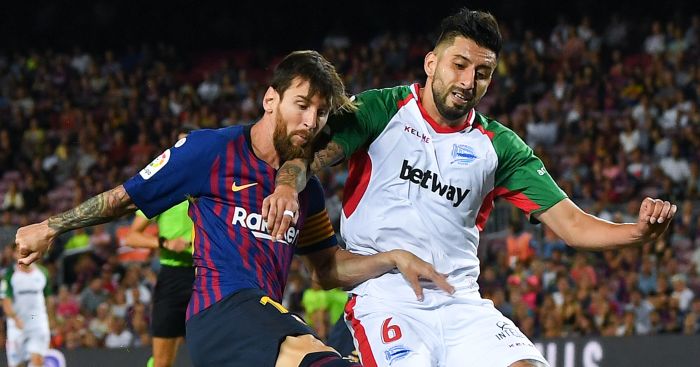 Barcelona coach Ernesto Valverde praised his players’ patience as they got their season off to a winning start.

Lionel Messi scored twice as champions Barcelona beat Alaves 3-0 at the Nou Camp in their opening match of the new La Liga season.

Messi, who saw his Argentina side fail to make an impact at the World Cup in Russia, returned to club action in a determined mood and rattled the crossbar with a first-half free-kick.

The Barcelona captain, taking the armband following the departure of Andres Iniesta, eventually broke the deadlock when his clever low free-kick flew under the wall on 64 minutes.

Substitute Philippe Coutinho added a well-taken late third before another fine bit of individual skill from Messi wrapped things up in stoppage time.

Quoted on Barcelona’s official website, Valverde applauded his squad for their improvements throughout the match.

“Although we were close to scoring, we could sense how difficult it was getting. They defended very well out there, they were very compact. We were lacking a bit of rhythm early on but then we started getting more chances and finally opened the scoring,” he said.

“When Alaves started opening up more, we were able to kill off the game.

“All the same, the second goal was hard to get too. But as the minutes went by, we got better and better.”

Singling out Messi, the boss added: “We are so fortunate to be living in the time when Leo Messi is playing.

“It’s a pleasure to have him playing for us, he never fails to surprise.”