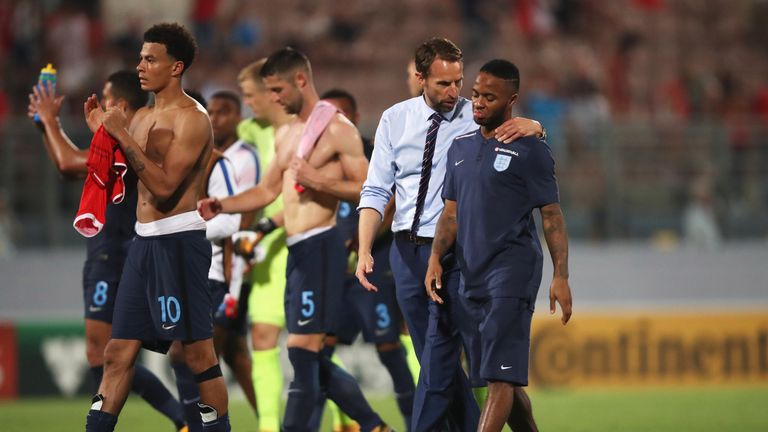 There are many pressing concerns that Gareth Southgate must resolve, though one which is often overlooked is how the England manager gets the best out of Raheem Sterling.

The Manchester City forward was hauled off at half-time against Malta in September, dropped for the next game against Slovakia, recalled against Slovenia and then missed out against Germany and Brazil because of injury.

So, what is the plan for Sterling given the constraints that Southgate has created with his apparent insistence on playing a three-man defence?

If Sterling plays to the right of a fit Harry Kane in Russia in a 3-4-3 formation, and in front of his City team-mate Kyle Walker, it is difficult to see how Marcus Rashford and Dele Alli also fit in.

Sterling has unfairly been made a scapegoat for England and his form for his country has waned, with his most recent goal coming against Estonia in October 2015.

That is in sharp contrast to the tune that Pep Guardiola has got out of him at club level. Does Southgate even believe in him?

The trio of Sterling-Rashford-Alli should be producing more than two goals in 29 combined appearances especially given the calibre of opponents they have been playing against.

Likewise England, who have scored only 21 goals in 14 games under Southgate.

Southgate has name-checked Harry Maguire, Joe Gomez and John Stones following their performances in the goal-less draws against Germany and Brazil last November, as if he regards them for the here and now, and not just the future.

It should be a concern that Stones is out of the City side at the moment and has played only once in the past month, while Gomez has just returned for Liverpool, albeit at right-back.

Yet this is the path down which Southgate wants to proceed: ball-playing centre-backs with players such as Gary Cahill, Chris Smalling and Michael Keane out of the picture for the time being.

What will be interesting in the games with the Netherlands on Friday and Italy next Tuesday is how the new boys James Tarkowski of Burnley and Swansea’s Alfie Mawson fare.

Cahill, having played in eight of England’s ten qualifiers for the tournament, will feel hard done by.

Also, Southgate needs to decide who his No. 1 goalkeeper is when arguably the quartet of Joe Hart, Jordan Pickford, Jack Butland and Nick Pope all need game time.

“We’ve got to pick the ‘keeper in terms of who is going to be the best to play the way we want to play, handle the tournament, handle the experience of being England No. 1 which comes with responsibility… We just have to make the right decision,” Southgate said.

He must be sure the goalkeeping conundrum does not undermine his team, with England having just six hours of football left before they open their World Cup campaign against Tunisia on June 18.