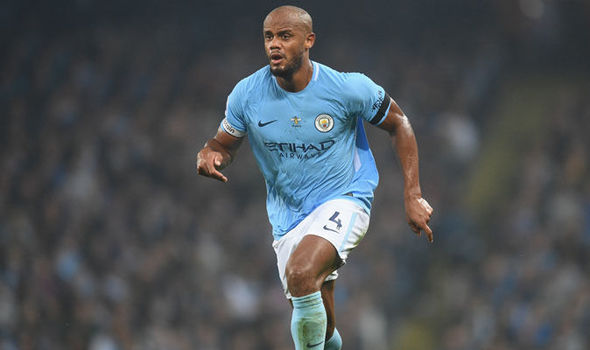 With Kompany watching on at his wife’s family home, Jay Rodriguez’s goal ensured the trophy will head to the blue half of Manchester for the third time in seven seasons without a ball being kicked.

The anti-climax of the denouement, though – the polar opposite to the circumstances in 2012 when the club won their first Premier League title after Sergio Aguero scored with the last kick of the season – should not disguise the scale of City’s achievement.

Guardiola’s team could still win the league by a record margin, with a record points haul (now on 87), having won more games (28) and scored more goals (93) than any team before them.

But Kompany was quick to dampen talk of a City “dynasty” after their first league title since 2014.

“The desire to never be satisfied has transferred to the team,” he said. “We want to stay humble about the fact that it’s not a dynasty… It’s one title and there is still so much work to be done before the full potential is unlocked.

“I’ve been lucky to win three (titles) but I’ve never retained the title and I want to see if this team has got it to carry on and be even more successful.”

The Belgian defender later joined team-mates Bernardo Silva, Kyle Walker, Fabian Delph and John Stones at a local pub to toast the title win with City fans and his impassioned celebratory speech has since gone viral on social media.

David Silva shared a photo on Instagram of his prematurely born son, reflecting on his third league win as the “most special in this tough year”.

Pundit Gary Lineker praised the manner of City’s triumph, tweeting that it was “thoroughly deserved and won with a style of football that is truly joyous to watch” while dating app Tinder, one of the club’s sponsors, posted a tongue-in-cheek message on Twitter: “Looks like we swiped right on a winner.”

And speaking after Saturday’s 3-1 win over Tottenham, Guardiola singled out the 1-0 win over Chelsea in September as the moment his side believed they could triumph.

“We played so well in many games,” he said. “Winning in Stamford Bridge gave us the confidence that we could do it. Against the last champions, that gave us the belief that we were able to go there and play the way we played.”

Worryingly for City’s rivals, there are no signs that this is the culmination of their journey either and yet more investment will no doubt follow in the summer.

The Spaniard – whom the club, according to The Times, hope to tie down to a new contract – believes the level they have set this term can be an inspiration for the future.

“Maybe it (the Champions League quarter-final exit to Liverpool) was a good lesson for the club for next season,” he added.

“We will have to try (to get better). We cannot deny that this season we were good. To win 18 games in a row, you have to be mentally strong.

“Of course the same isn’t going to happen next season but that is the target. We were able to do it once and that means you can do it twice.”