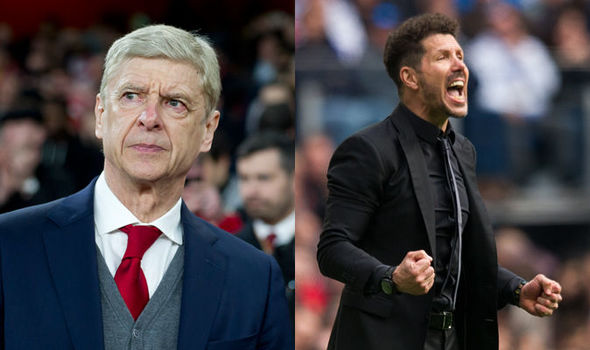 Arsenal’s Europa League semi-final against Atletico Madrid tonight will be a clash of styles as stark as they come but Arsene Wenger and Diego Simeone are anything but polar opposites.

Wenger may share little common ground with Simeone on how best to win matches but there is no coach in the game that knows better the sense of identity and attachment to a club, which the Frenchman is now in the process of curtailing. “I’m staying because this club has a future and that future is us,” Simeone said at the end of last season, before extending his contract to 2020 in September.

If he sees it through, he will have been in charge at Atleti for almost nine years, still 13 short of Wenger’s 22 but far closer in terms of status, impact and legacy. His standing is enhanced by two stints and five years playing for Los Rojiblancos, the first spell yielding a league and cup double in 1996, when Simeone was the captain. When they next won the Copa del Rey in 2013 and La Liga in 2014, Simeone was the coach.

The cult of Simeone at Atletico is also powerful because it is unusual. In December 2011, he was their 12th appointment in 10 years and fifth in the last two. Like Wenger, he has brought stability, but in a club where previously there was none.

Reality of numbers
Like Wenger too, Simeone enjoys casting Atletico as underdogs, up against rivals with far greater resources and far less concern for long-term thinking. “What we cannot do is forget the reality of the numbers,” Simeone said, after his side lost 1-0 to Barcelona last month. “In 14 years Madrid and Barca have always won the league, 13 times in 14 years. We made possible the impossible once but it is clear that it will not happen every year.”

They nabbed the La Liga title in 2014, an astonishing achievement, but Atletico’s priority has been qualification for the Champions League, particularly during the club’s switch to its new stadium, a move completed at the start of this season.

When chief executive Miguel Angel Gil paid a rare visit to the club’s training ground earlier this month, his message was clear. “Qualify for the Champions League,” Simeone said. “He has been telling me that for five years.”

Wenger once suggested a top-four finish was akin to winning a trophy and he knows the challenges of leaving a long-held home, both psychological and financial. Many suspected Simeone would leave after Atletico departed the Vicente Calderon but he has stayed to oversee the transition while enduring the club selling some of its most expensive stars to make it work.

Radamel Falcao, Mario Mandzukic, Diego Costa and Filipe Luis have all been allowed to leave for big sums. It remains to be seen whether Antoine Griezmann and Jan Oblak follow suit this summer. And there is Simeone and Wenger themselves, each symbols of their respective clubs but both at their least comfortable when discussing personal achievements.

Simeone prefers to divert focus onto his players and the next game, just as Wenger has tried to do since announcing he will leave Arsenal at the end of the season. Atletico, and Simeone, stand in the way of a potentially glorious farewell. “In the end, it is the pitch that talks,” Simeone said. “And when the pitch talks, all the coach does is listen.”