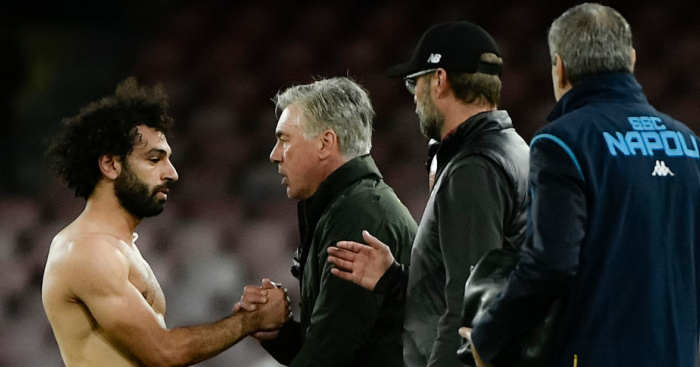 Carlo Ancelotti refused to brag after seeing Napoli inflicted a rare defeat on Liverpool – but has explained how his men were able to get the better of Jurgen Klopp’s side.

The Reds named a strong line-up at the Stadio San Paolo, but were undone by a late Lorenzo Insigne goal as the Serie A giants recorded a 1-0 victory.

Klopp, who saw his side lose the unfortunate Naby Keita after just 19 minutes, failed to register a shot on goal for the first time in a Champions League match since February 2006.

Klopp was happy to take the blame for their dismal display as Ancelotti extended his personal record against Liverpool to six wins and three defeats.

Analysing his side’s victory and how they managed to nullify the threat of Liverpool, Ancelotti said: “I think we interpreted the game really well, we changed a bit – but not too much – the way we played with an extra central defender.

“We were able to keep possession. Overall it was a very good approach from the team, there was a perfect balance to avoid the attack and managed their strong strikers up front.”

Ancelotti was asked what the victory will mean for his side going forward as they look to edge their way through a tricky Champions League group, with a double header against his former club PSG still lying in wait.

“It gives a lot of character to the team and it’s great we kept the same mentality from the start to the end. It gives great self-confidence to the players,” he added.