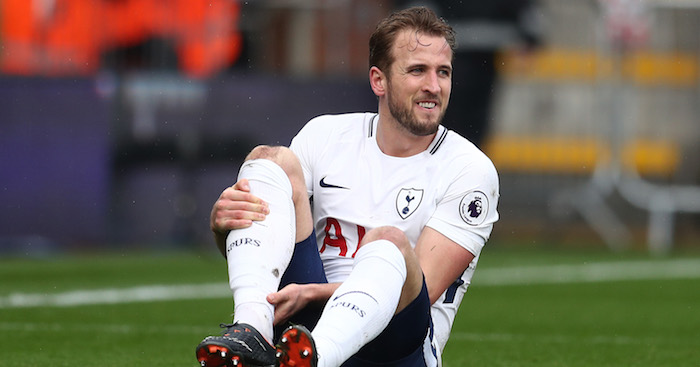 Mauricio Pochettino has admitted he is worried about Harry Kane after he came off in the first half of Spurs’ 4-1 win at Bournemouth.

Tottenham climbed to third in the Premier League but lost top scorer Harry Kane to injury as they came from behind to win on the South coast.

England international Kane limped off with just over half an hour played at the Vitality Stadium after sustaining an ankle problem while scoring an offside goal.

Spurs were 1-0 down at that point, following Junior Stanislas’ early opener, but a Dele Alli goal, Son Heung-min’s brace and Serge Aurier’s late strike turned the game in their favour as they bounced back from their midweek Champions League exit to move above Liverpool in the battle for a top-four finish.

Victory on the south coast stretched Spurs’ unbeaten league run to 12 games, although Kane’s early departure will undoubtedly be at the front of manager Mauricio Pochettino’s mind ahead of next weekend’s important FA Cup quarter-final at Swansea.

“I am concerned until tomorrow, and the scan. We can say nothing more,” Pochettino told Sky Sports.

“Of course I worry about him, his ankle we hope it is not a massive issue for him and the team and hope he can recover as soon as possible and be available.”

The Argentine reflected on the performance: “It was the perfect answer after the massive disappointment against Juventus. We conceded the first goal but I think the team was better than Bournemouth.

“It was a massive challenge after Wednesday but the team showed great character and personality. After 1-0 down the team played great football and fully deserved the result.

“Sometimes it looks like it is the 11 who play each week is important but for me the squad is important and we showed that today.

“Son is having a fantastic season, the best season since he arrived. He helped the team to achieve these three points.

“The target is to finish as high as possible.”