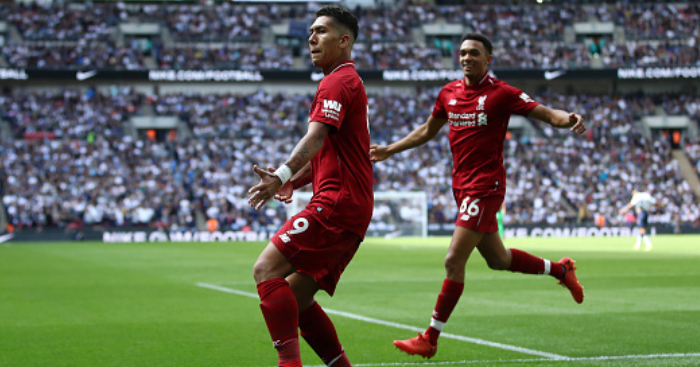 Graeme Souness and Gary Neville both ran the rule over Liverpool’s title credentials following their impressive 2-1 win at Tottenham on Saturday.

Goals from Gini Wijnaldum and Roberto Firmino helped put the Reds 2-0 up before an injury-time strike from Erik Lamela set up a tense finish.

But anything but three points would have been harsh on the Reds and Klopp’s side maintained their 100% record this season to secure a 2-1 win and their fifth Premier League win in five games.

We explained at full-time why Liverpool can extinguish their title demons this season – and it seemed to be a view shared by Sky Sports pundit Souness.

“The result does not flatter Liverpool, it flatters Spurs,” he said. Liverpool were fabulous, really impressive. The front three were a real menace.

“Any manager who wants to win the Premier League will be impressed with that Liverpool performance today.”

Pressed further on whether this could be Liverpool’s year, Souness continued: “Yes, I think so. This is as good a Liverpool side we’ve seen since they last won it [English championship].

“They have strength all over the park. Look, any side who finishes higher than Liverpool will finish as champions. Today they made a statement.”

Neville, meanwhile, things that Liverpool will take some stopping but stood by his claim he made in The Times that the Reds do not have the strength in depth to challenge on multiple fronts this season.

“The point I was making earlier on in the week I thought was a positive really, in the sense that probably in this time of the season over the last 28 years, I never felt that Liverpool had a strong chance of winning the league title,” the former Manchester United captain told Sky Sports.

“Liverpool, obviously, have a great history with the Champions League and with the European Cup. But make no mistake about it, Liverpool FC need to win a Premier League title. And that would be a game changer for them.

“And I do genuinely think they have a chance and to give themselves the best possible chance, and to remove one of those risks would be to not have too many matches for their best XI.

“Because I do believe that with that best XI on the pitch week in, week out, they have an opportunity to do it.”