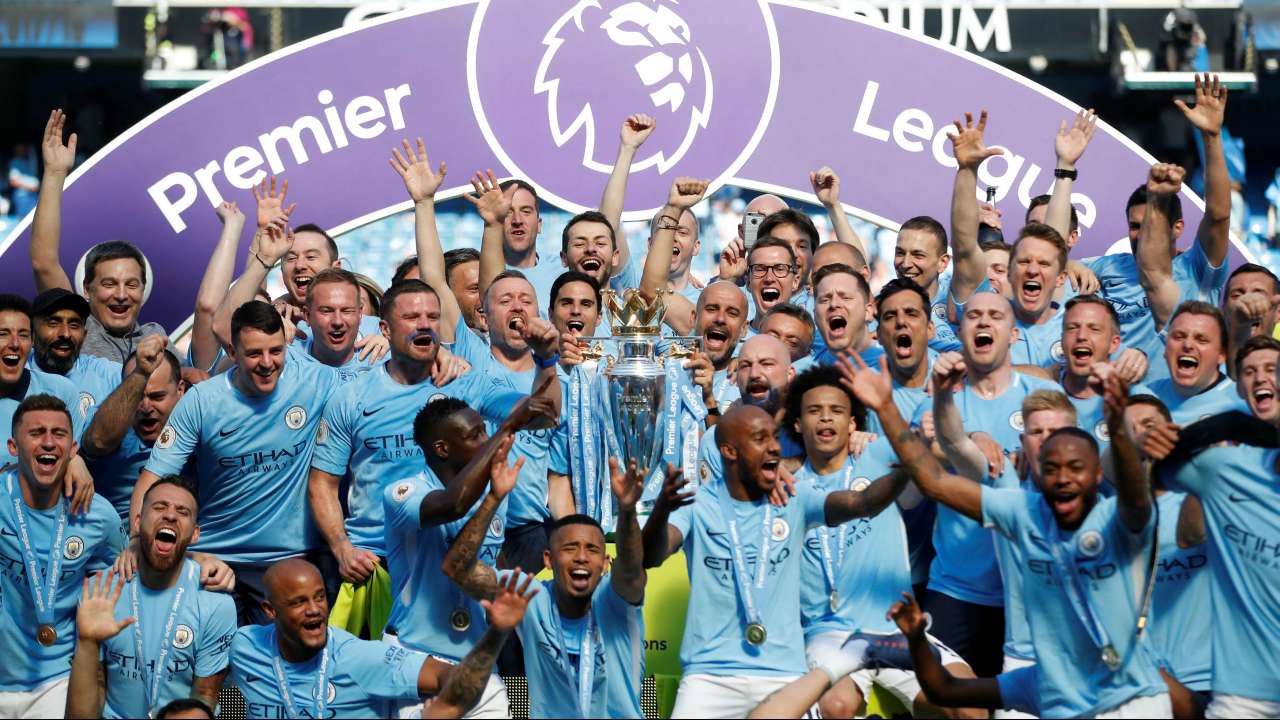 Reuters summarises the campaigns of the 20 English top-flight clubs (listed in the order they finished the season):

1. MANCHESTER CITY
After a tricky first season, Pep Guardiola’s blueprint reaped spectacular rewards for record-breaking City, who were literally in a league of their own from day one.

Helped by another massive investment in the transfer market, Guardiola married his possession-based style with pace and power, with right-back Kyle Walker an outstanding signing.

They became the first top-flight club to gain 100 points and broke records for goals scored in a Premier League season (106), consecutive wins, most victories (32) and the best goal difference (+79).

United enjoyed their best finish and best points haul since Alex Ferguson bowed out by winning the 2012-13 title.

The exploits of City, however, put Jose Mourinho’s progress in the shade. Bridging the 19-point gap to their neighbours will be his big challenge next season, as will getting consistent displays from Paul Pogba and Alexis Sanchez.

United won all 21 games in which they scored first.

While Mauricio Pochettino’s wait for silverware in North London goes on, he can point to a season of top-four consolidation and delivering Champions League football for a third successive season.

Fears that Tottenham would struggle at their temporary Wembley home were largely unfounded, while Harry Kane continued to bolster his reputation as one of the world’s best strikers.

Tottenham finished as London’s top club for the first time in 23 years.

Jurgen Klopp’s side beat City three times (twice in the Champions League) and matched them for flair.

Once their early-season defensive woes were eradicated, Liverpool proved hard to stop, with PFA Player of the Season Mohamed Salah turning himself into an Anfield cult hero.

The season could yet end with the Champions League trophy and should that happen, Liverpool could be the most likely side to close the gap to City next season.

Chelsea’s hopes of successive titles disappeared quickly as City disappeared into the distance but with the players at his disposal, Antonio Conte’s failure to nail down a top-four finish was an underachievement.

Alvaro Morata began life well at Stamford Bridge but ultimately was unable to fill the hole left by Diego Costa’s departure, while Tiemoue Bakayoko proved a huge downgrade on Nemanja Matic, who was surprisingly sold to Manchester United.

Arsene Wenger’s final season in charge proved an anti-climactic one as the Gunners’ gradual decline ended with them finishing in their lowest position since he took over in 1996.

Summer signing Alexandre Lacazette flattered to deceive while Arsenal’s defensive frailty and lack of a commanding presence in midfield were cruelly exposed.

Finishing “best of the rest” was a superb feat for manager Sean Dyche, who led Burnley to their best top-flight finish since 1974 and a return to European football after a 51-year absence.

While Burnley lack the household names of the top six and managed only 36 goals, they boast a tremendous work ethic and stability that could help establish them in the top flight.

Manager Sam Allardyce is not Mr Popular at Goodison Park but he will point to a job well done in steering the club to a top-half finish after the early-season turmoil which saw Ronald Koeman sacked after Everton won just two of their opening nine games.

A strange season for Leicester under Claude Puel. They avoided the relegation scares of the previous campaign yet there was discontent around the King Power Stadium towards the end of the season after a run of defeats cost them a chance of a place in Europe.

Expectations are always high on Tyneside, often ridiculously so, but a mid-table finish represents a solid return to the top flight for Rafael Benitez’s side. The fans sang, “We want You to Stay” to Benitez after their 3-0 win over Chelsea on Sunday and with the Spaniard in charge, they appear in good hands.

After losing their first seven games without scoring a goal – the most woeful start in English top-flight history – Palace’s recovery was nothing short of miraculous.

Bournemouth continue to punch above their weight under Eddie Howe’s thoughtful stewardship and the club, whose home ground holds only 11,000 fans, secured a fourth successive season in the top flight with something to spare.

A comfortable finish fails to tell the story of a season of strife on and off the pitch.

Slaven Bilic was sacked in November with West Ham in 18th spot. Since then, David Moyes has guided the Hammers away from danger despite an often toxic atmosphere at the London Stadium, which has yet to feel like a real home.

Watford began the season with Portuguese Marco Silva at the helm and ended it with Spaniard Javi Gracia in charge. But they always managed to keep their heads above the relegation dogfight.

Brighton’s first year back in the top flight since 1983 was always going to be a huge challenge but manager Chris Hughton will take great credit for consolidating the Seagulls’ place. Glenn Murray’s goals helped Brighton gain promotion and his 12 proved invaluable for Hughton’s side

David Wagner’s side were favourites for the drop in their first top-flight season for 45 years and that looked the likely outcome in the final weeks before priceless draws against Manchester City and Chelsea in May.

Southampton survived by the skin of their teeth, having sacked Manuel Pellegrino in March and replaced him with former player Mark Hughes. It looked hopeless when the Saints lost their first three games under Hughes to slide into the bottom three but he galvanised the squad and two wins and two draws thereafter meant a 1-0 loss to City on the final day was inconsequential.

Swansea’s downward drift finally cost them their seven-season stay in the top flight and to make matters worse, Welsh rivals Cardiff City will take their place.

Bottom at Christmas, Swansea sacked Paul Clement and his replacement Carlos Carvalhal looked to have a engineered a great escape. But the revival ran out of steam as they took just two points from their last seven games

Stoke’s relegation after 10 years in the top flight could be traced to dreadful transfer dealings.

Record signing Giannelli Imbula spent the season out on loan while Kevin Wimmer and Saido Berahino could not even get in the team. Mark Hughes was sacked in January after five steady years in charge but Paul Lambert could not inspire a turnaround.

West Bromwich Albion won their first two games of the season but had to wait until January to taste three points again – by which time they were a sinking ship.

Tony Pulis was sacked in November, his replacement Alan Pardew lasted until April before caretaker Darren Moore inspired a late revival that was too little, too late.