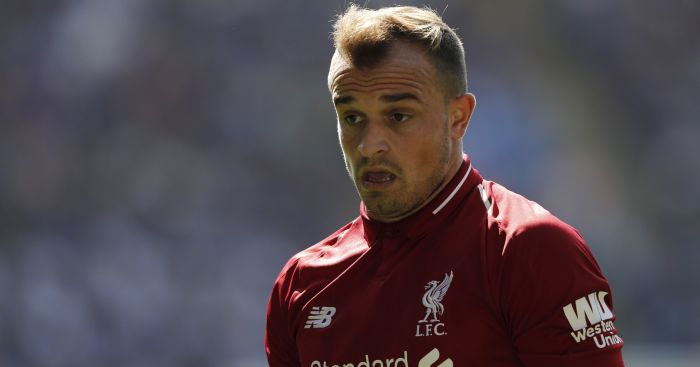 Xherdan Shaqiri wants to bring his “experience” of winning titles in other countries to Liverpool as they look to win the Premier League title this campaign.

The Switzerland international swapped Stoke City for the Reds in the summer after the Potters were relegated from the Premier League last season.

Many pundits have tipped Jurgen Klopp’s men to challenge Manchester City for the Premier League title this season after they strengthened their side in the transfer window.

At times Shaqiri’s attitude has been questioned at previous clubs but he thinks he can offer something different from his time winning titles with Bayern Munich in Germany.

“The aim is for the club to win something – that has to be the goal of our team,” Shaqiri told Liverpool’s official website.

“We have to take every game and try to win it, then close out from your mind the last game you won and think: ‘OK, we go forward now and look to the next game.’ It is like this that you win titles and I hope we are going to do that this year.

“First of all, we want to try to play very good football. But we also know it is not always the case that good football wins, so we need to know how to win games – that’s important – and to be competitive with other teams.

“As a new player I want to show my football. Most of the players know me already from the Premier League and from Bayern and I have a good amount of experience.

“I won many titles with Bayern and I want to try to give this experience to this Liverpool team which is still young and try to help them win something.”