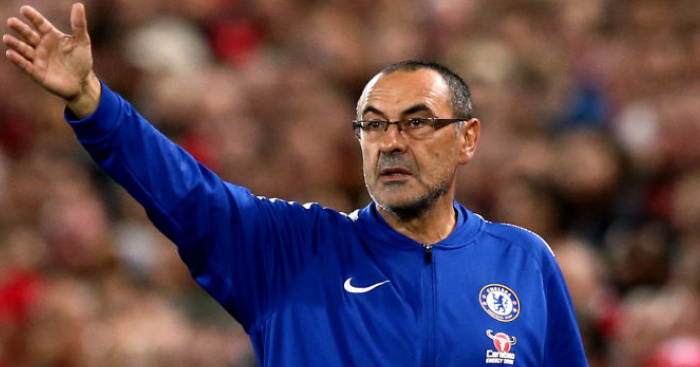 aurizio Sarri has boldly claimed that his side may have to rack up 100 points to keep up with Liverpool and Manchester City this season.

The Blues were wasteful on Sunday as Willian, Eden Hazard, Alvaro Morata and Marcus Alonso all missed good chances to win the match for the Londoners.

It wasn’t to be as the Toffees dug in for their point and Sarri criticised his side for moving the ball too slowly.

“To be honest, I didn’t like very much the first 25 minutes because, like in the match against Crystal Palace, we started the match moving the ball very slowly. So it was impossible for us to be dangerous, and easy for the opponents to defend,” the former Napoli boss revealed.

“Why it happened is a very good question and very difficult to answer. I don’t know. I don’t think the problem is a physical problem because, in the last two or three matches, the effort was the same.

“In the second half we played at another speed, at another intensity, so I don’t think it’s a physical problem. Maybe a mental problem.

“We have some difficulties approaching the match from a mental point of view, maybe. I don’t know. It’s very difficult to answer.

“I think that, during a championship like the Premier League, this can happen to any team, a match like this. So I don’t know. I don’t think so, but in this moment the average of points of City, Liverpool is very high.

“I think about 100 points. So it’s very difficult to stay close to these teams. But I don’t know. I hope that a match like our match today will happen in the future to other teams.

“But three matches is a very short time, so I don’t know. Maybe it’s chance. But we have to be careful, I think. In the last three matches, you are right.

“We can do better. But I think we are playing very well. But I’m really very proud about the record. I know very well I have to say thank you to the club, and thank you to my players.

“Finally, I have to say thank you to my staff. But, of course, I’d prefer three points today.”