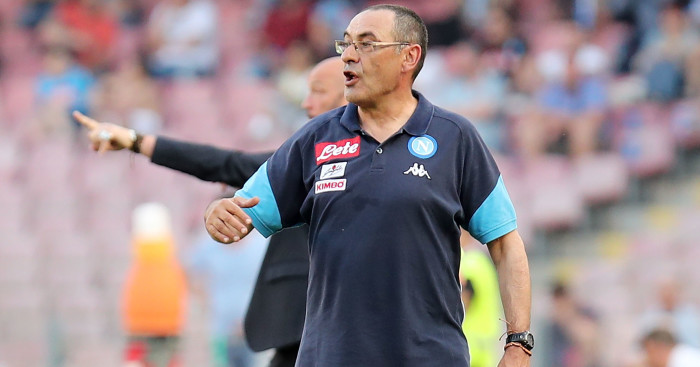 Jorginho says he is “getting ready for a new adventure” with his transfer to Chelsea set to be announced.

Chelsea are on the verge of completing a double swoop on Napoli with Jorginho and former coach Maurizio Sarri set to be unveiled at Stamford Bridge.

Sarri is still under contract in Naples, but he has been replaced by Carlo Ancelotti and his long, protracted switch to Chelsea to replace Antonio Conte is close to completion.

Jorginho left Italy last night for London to complete formalities on a €65million deal, while Sarri is set to cost the Blues around €8million, according to Calciomercato.

Before he left Naples last night, Jorginho was asked by CalcioNapoli24 about his Chelsea move.

” I will miss Napoli very much so. I played there for five years and I will always be loyal to them. I had a great time in Naples as I am now getting ready for a new adventure,” he said.

A reporter then asked: “Will you say hi to Sarri for us?”

“Yes I can do that for you if you like,” replied Jorginho, before being asked who would replace him at Napoli.

The Napoli midfielder looked all set to sign for Man City last month, but Chelsea entered the equation late on.

De Laurentiis admitted a deal with City was agreed, but claims the player prefered to live in London, and he also revealed Jorginho is likely to be joined at Stamford Bridge by Maurizio Sarri.