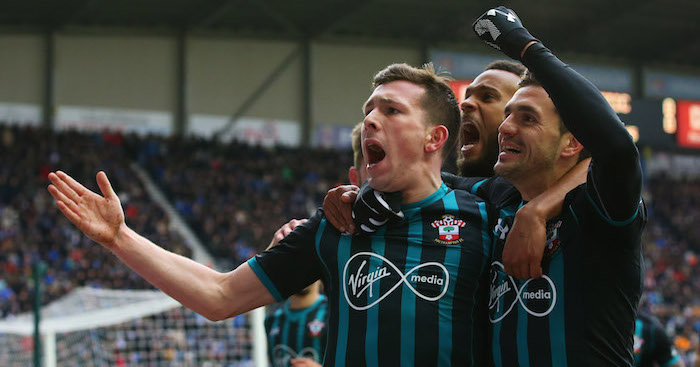 Hughes’ tenure began with a 2-0 FA Cup quarter-final victory over League One Wigan, with the Saints able to escape their relegation worries for an afternoon and celebrate booking a trip to Wembley.

Hughes is back in work just over two months after being sacked by Stoke, one of Southampton’s fellow strugglers, but his contract only runs until the end of the season. Keep Saints up, and he may well earn a longer stay at the club he represented for nearly two years in the final stages of his playing career.

The Welshman succeeded Mauricio Pellegrino last Wednesday and full-back Bertrand has been impressed by what he has seen so far.

“Very good,” said the 28-year-old. “I’m looking forward to playing the remainder of the season with him. He’s been there and done it. Even as a player, he’s vastly experienced as well, and whatever he can share with us hopefully we can use and do what we need to do.”

Saints sit two points from safety and have won just one of their last 17 league games, with a 3-0 defeat by Newcastle spelling the end of the road for Pellegrino.

“It’s a shared responsibility, from the manager to the players,” said Bertrand. “But when push comes to shove unfortunately it’s the manager that gets the bad end of it.”

Sunday’s match allowed Hughes the relative luxury of assessing his players outside of the Premier League pressure cooker, and all will hope it proves a catalyst for the challenges to come.

Bertrand said: “That’s what it’s about, just getting a win and taking confidence from that. We can take progressing in the competition into the league.”

Wigan dominated the first half but could not find the breakthrough and Southampton made them pay, upping their level in the second half and scoring through Pierre-Emile Hojbjerg and Cedric Soares, while Manolo Gabbiadini had a penalty brilliantly saved by Christian Walton.

Bertrand was not surprised by the pattern of the match, saying: “I think that’s tradition really, if you look at past fixtures. Wigan are a good team but lack quality compared to us. They have to fight and they made it a fight. It’s about competing with that and not being undone. After 50-60 minutes they died.”

Bertrand’s focus now turns to England and he will hope to take part in friendlies against Holland and Italy before resuming the relegation fight with a crunch clash against West Ham, who sit directly above Southampton in the table.

“It’s definitely a massive game,” he said. “It’s something you might as well look forward to. There is no other way. You go there and relish the opportunity because if you come out of there with a result it leaves you in very good stead.”