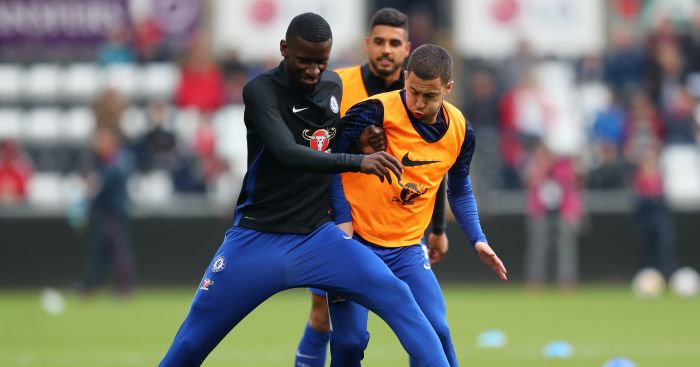 Antonio Rudiger thinks Chelsea need to start killing off matches and has called on three players in particular to help relieve Eden Hazard of the goalscoring burden.

Hazard has scored eight goals in nine matches for the Blues and Belgium since the arrivial of Maurizio Sarri at Stamford Bridge and some pundits have claimed he is now the best player in the Premier League.

Meanwhile, the hype surrounding Hazard has been a timely distraction for Alvaro Morata and Olivier Giroud’s lack of goals so far this campaign – with only Morata registering a goal.

And German defender Rudiger wants the club’s strikers and Willian – who has bagged two goals this campaign – to help out Hazard.

“We need to learn to kill matches,” Rudiger said. “It’s not only on Eden’s shoulders. We need the other players to help him with scoring.

“He has been doing his job very well again, but the other guys must score too – Giroud, Morata, Willian have to score. As a team all of us have to provide more goals, the defenders as well.

“At the end of the day the best scorers are Hazard and Pedro, but with the quality of players we have on the pitch, it’s (the lack of goals from elsewhere) not too good.”