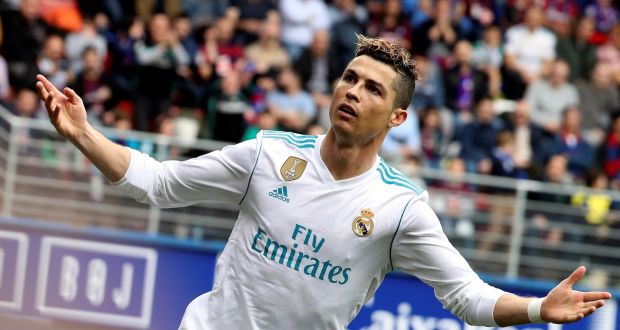 Cristiano Ronaldo struck late with a bullet header to give Real Madrid a 2-1 win at Eibar in La Liga on Saturday, taking his side to within four points of second-placed Atletico Madrid.

Ronaldo scored for the seventh successive game in all competitions by blasting into the net in the 34th minute after chesting down a long ball by Luka Modric, but eighth-placed Eibar pegged the champions back when Ivan Ramis outjumped Sergio Ramos to head home from a corner in the 50th.

Ronaldo was denied by an inspired save by Eibar’s Marko Dmitrovic, who clawed away the Portuguese’s header following a cross from Gareth Bale.

The irrepressible striker had the final say, however, meeting a cross from Dani Carvajal in the area and powering the ball beyond the Serbian goalkeeper in the 84th minute, scoring a 13th goal in his last seven games in all competitions.