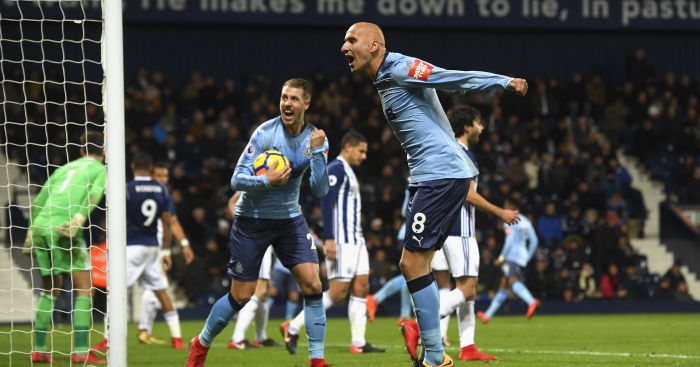 Rafael Benitez is convinced Jonjo Shelvey can give England something different as manager Gareth Southgate looks for a new Paul Gascoigne.

Southgate bemoaned the lack of a “game-changing” midfielder during the latest international break and while Newcastle’s Shelvey may be a different type of player to the former Magpies star, club boss Benitez is convinced he has plenty to offer at international level.

Asked if he could be a creative force for England, the Spaniard said: “For me yes, for sure, because he has the quality, he has the vision, he can make these passes that strikers like behind the defenders, things like that.

“But especially because in a team, in a squad, you have to have different kinds of players and I don’t see too many like Jonjo in the team.

“Southgate is the manager, he has to decide. I am the manager of Newcastle United, Shelvey is my player. Can he play for England? Yes, that’s it.”

Shelvey, who has six senior caps to his name, has endured a frustrating start to the new season having missed Newcastle’s last three games with a thigh injury, but is back in the squad for Saturday’s Premier League clash with Arsenal.

But the 26-year-old finished the last campaign in some of the best form of his career and, at one point, was touted as an outsider to make Southgate’s World Cup squad.

Benitez said: “Obviously, the manager knows what he wants to do, but when you have a squad with midfielders, one like Jonjo is a different option.

“I am not saying he should play every game, but he offers something different. I will say again for me, he is a key player because he plays in a different way.

“Does that mean he is perfect? No, but he is a good player.”

Shelvey’s temperament has been questioned – and with good reason – in the past, but Benitez, who revealed he has not spoken to Southgate about the former Charlton, Liverpool and Swansea player, has seen him mature on and off the pitch during his time on Tyneside.

He said: “He has to manage the game and make the right decisions in the game – if he can do that, he can play for any team because he has the technical ability.

“It is just to be sure he can do all of those things, and that comes with experience, maturity and composure. He is a much better player.”