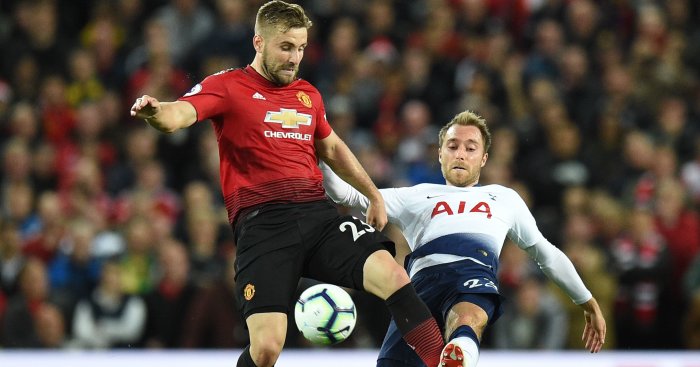 Mauricio Pochettino is reportedly hoping to capitalise on the uncertainty around Luke Shaw’s contract situation at Manchester United and take him to Tottenham.

The Sun claim that Tottenham want to sign the left-back, who has found himself back in favour at Old Trafford.

Shaw was stretchered off with a serious-looking head injury during the second-half of England’s defeat to Spain on Saturday, but the former Saints man is recovering well after being knocked unconscious, although but he will not play against Switzerland on Tuesday.

That injury has come after a positive spell at United with Shaw firmly back in favour with Jose Mourinho, making all four Premier League starts to date, scoring once.

The 23-year-old has had a tough time at United since his move from Southampton in July 2014 and he has made only 59 starts in four years and was often singled out by Mourinho last season for criticism.

It comes as no surprise then that Shaw is taking his time over signing a new deal that has been offered to him, with his current contract set to expire next summer.

Shaw is free to speak to foreign clubs in January, but Spurs, per the source, are interested in adding Shaw to their ranks either for a knock-down price or for free next summer.

The report claims United are ready to improve his wages of around £130,000-a-week to keep the England man, but Shaw is in no mood to rush into a decision.

United are keen to get him tied down so they do not lose the £30million signing for free next year.