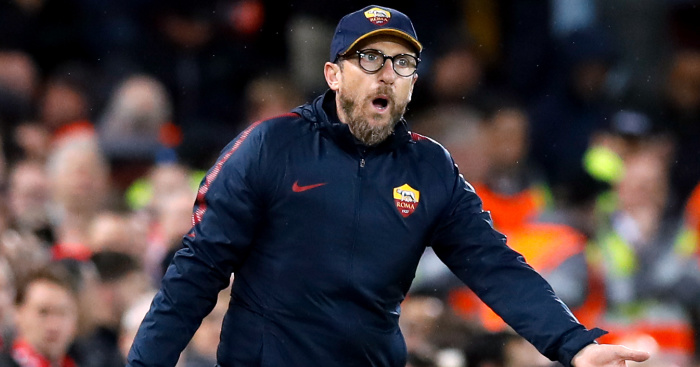 Rio Ferdinand and Frank Lampard let rip into Eusebio Di Francesco’s tactics as Roma left the back door completely open in their 5-2 defeat at Liverpool in the Champions League semi-finals.

The Italians started brightly at Anfield, but their three-man defence allowed Liverpool to exploit the numerous space in behind and race into a 5-0 lead before a late rally from Roma gave them hope.

Pundits Rio Ferdinand and Frank Lampard were both astounded by Roma’s tactics as their high defensive line was constantly punished by Liverpool’s attacking triumvirate.

“Roma came here and almost gave them a free pass to the final,” Lampard claimed.

“Their tactics were incredible, the way they set up.

“Liverpool were brilliant in the way they ripped them apart, but it will be mixed emotions at the end.”

Ferdinand blamed Di Francesco for the naive way they set up.

“I think the Roma manager has to take full responsibility for the result,” the former England and Manchester United defender said.

“It’s not often you sit here and say a manager is at fault completely for a team’s performance.

“I think today he let his players down, the way he set them up. He set them up almost certainly to lose this game, the way they played – a high line at the back against a team that play quick football.

“I question whether he’s even seen Liverpool play this season, the way he set them up.”