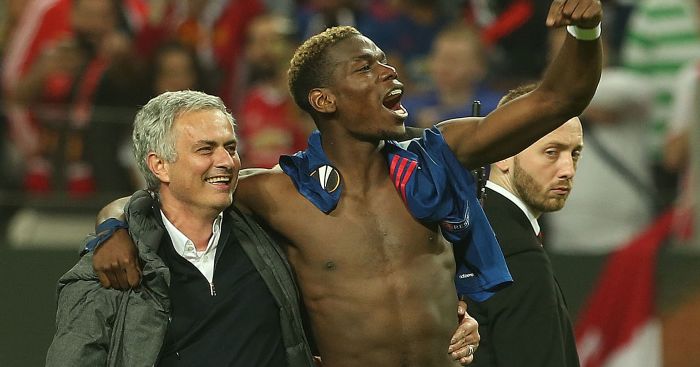 With Paul Pogba’s future at Manchester United reportedly hanging by a thread, the exact moment he fell out with manager Jose Mourinho has been explained in a report.

The duo have been at loggerheads in recent months with the Manchester United manager dropping the midfielder from his first-team line-up for a number of high-profile matches after a drop in the Frenchman’s performances.

And a report on Sunday morning claimed matters had got so frosty between the duo, that the only time they speak is through assistant manager Rui Faria and other United coaches.

United supporters and the media were first made aware all was not well between the duo following Manchester United’s 2-0 defeat at Tottenham on February 1, when the Frenchman was substituted at half-time.

Since then, Pogba has been dropped from starting line-up for a number of key matches, while the player was also hauled off against Newcastle.

The player also missed United’s FA Cup win at Huddersfield last month, while a “mystery injury” was blamed on his absence against Liverpool.

However, a report in The Sun claims relations first soured between the pair much earlier in the season.

According to the report, the £89million man angered the Portuguese boss by jetting off to Miami earlier in the year to recover from his hamstring injury.

During that period, Mourinho was unclear with Pogba’s recovery saying at the time: “He’s injured.

“It’s not an injury that I can have the hope, like I have with [Antonio] Valencia or [Phil] Jones.

“I have the hope to see them in training and to have a positive answer but long-term injuries I don’t speak about them.”

An Old Trafford source added: “The freeze between Pogba and Jose can be traced back to when he was ruled out injured.

“You could feel there was a stand-off. Jose was told Pogba wanted to do his rehab in Miami.

“The manager felt he would be better served staying in Manchester. He wanted to keep a closer eye.

“Pogba decided he wanted to go anyway, which did not go down well at the time.”