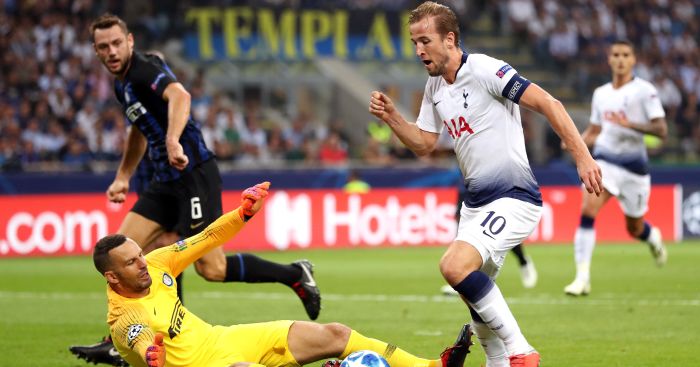 Mauricio Pochettino hit back at people questioning his decision to leave Kieran Trippier and Toby Alderweireld at home as Tottenham lost 2-1 at Inter Milan.

An opening Champions League win was on the cards at the San Siro after Christian Eriksen put them ahead, but they capitulated as goals from Mauro Icardi and Matias Vecino in the final eight minutes of action gave Inter the points.

It was the first time Tottenham have lost three times in a row under Pochettino, who opted to leave World Cup semi-finalists Trippier and Alderweireld at home.

The Argentinian was asked whether he regretted not bringing the pair to Milan, which saw him accuse journalists of disrespecting his players.

“Against Watford and against Liverpool, they were on the pitch. Wow, what a question, such an easy question, eh? You know, easy target,” he said.

“(It’s) easy to talk about the players that aren’t here.

“I think we need to talk about football. Because, you know I think you force me to say something that is not good.

“You disrespect the players that today showed better qualities than the opponent.

“Why disrespect the players that aren’t on the pitch? You can blame me and say, ‘Gaffer, you were so, so rubbish in your selection of the starting XI’.

“But please don’t disrespect the players who were playing, because it’s my decision. Kieran Trippier, Toby Alderweireld…. we have 25 players.

“And you believe that and sometimes you behave like you ask me with your question, that you can play only 11 and the other 13 or 14 players are rubbish, are s***.

“Sorry, but I am so disappointed because I am a person that respects you a lot and the players.

“When my decision is to play with XI, you must respect my decision because I am the manager.

“You show too much disrespect for the players who play in the position as the players you have given me the names of now.

“To be a player is so difficult, and of course for me it is easier on the touchline. I don’t run. It is so painful to hear when some people are not here, and you judge in that way and you kill players who give their best. It’s so unfair.”