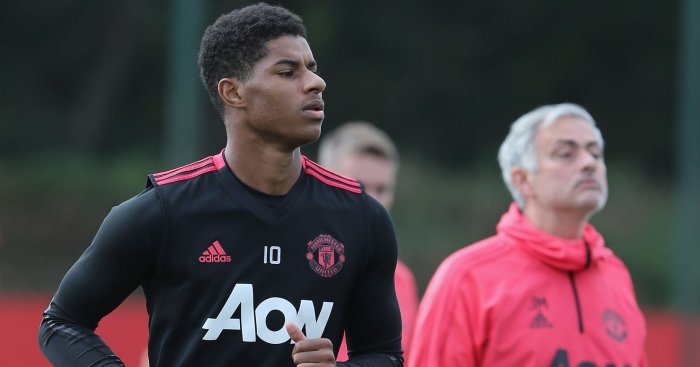 Jose Mourinho has reportedly continued to reassert his authority at Manchester United after giving Marcus Rashford a dressing down.

The United boss is involved in a power struggle with Paul Pogba at the current time after this week stripping the French midfielder of his vice-captaincy.

The former Juventus man was rested for the midweek defeat to Derby in Carabao Cup, but he was challenged by Mourinho the following day in training after posting an Instagram video of himself joking around during the cup defeat.

The awkward exchange between the pair, which was filmed, has stoked the speculation suggesting that one of the pair will soon be moving on.

Now though, the Daily Mail claim Marcus Rashford has also been reprimanded by Jose Mourinho after last week’s win over Young Boys in the Champions League.

The report claims the young striker did not complete a proper warm-down and “did not follow the instructions from coaching staff after the game”.

Mourinho apparently warned the 20-year-old, who was substituted after a drab display, that he was “not important to do as he is told”.

There has been a huge debate over the England striker’s game time at Old Trafford with the likes of Jamie Carragher, Alan Shearer and Ian Wright all recently suggesting that Rashford needs to move on to fulfill his potential.

Rashford was recently sent off after reacting to a rash foul from Phil Bardsley at Burnley earlier this month. He was banned for three games, but is available again to face West Ham on Saturday following a three-match domestic ban.

Apparently Rashford was also one of several players, as well as Pogba, singled out for criticism by Mourinho in a team meeting after the win in the Champions League in Bern.

Pogba was subsequently summoned to a Tuesday meeting with Mourinho at Carrington and stripped of the vice-captaincy.