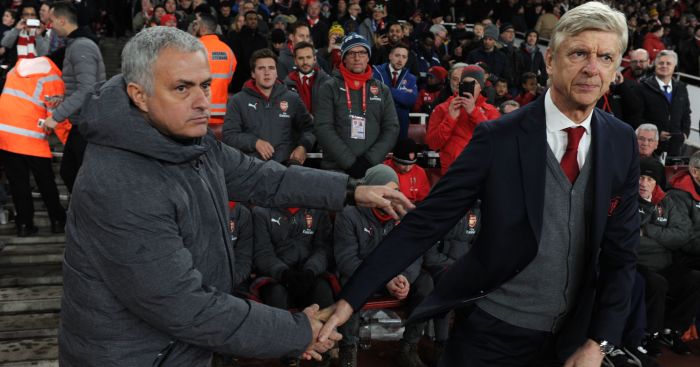 Manchester United manager Jose Mourinho has paid tribute to rival Arsene Wenger after the Frenchman’s decision to step down was announced today.

Mourinho, who had numerous run-ins with Wenger throughout his time in England, said he had great respect for the Gunners boss and hopes he does not retire from football when he steps down in May.

Manchester United tweeted: Congratulations on an incredible 22-year career at Arsenal, Arsene Wenger, and best of luck for the rest of the season… apart from on your 60th game against us next Sunday.”

And Mourinho said: “If he’s happy, I’m happy. If he’s sad, I’m sad. If he looks forward to the next chapter of his career and his life, I’m really happy for him.

Asked if he regretted those past confrontations, Mourinho added: “It’s not about regretting. I think your question is a typical question from somebody that was not in this side.

“You were not a manager, you were not a player, of course. You don’t know the way we respect each other, even when sometimes it looks as though in some moments we don’t.

“I know what it means: (he won) three Premier League titles, seven FA Cups, and not just that. What he did in Japan, in France. What he brought to the French football.

“What he gave to Arsenal even in the period without Premier Leagues, all the transition of the club from stadium to stadium, everything he did. We know what he did. If he’s happy with the decision, I’m really happy and I hope he doesn’t retire from football.”