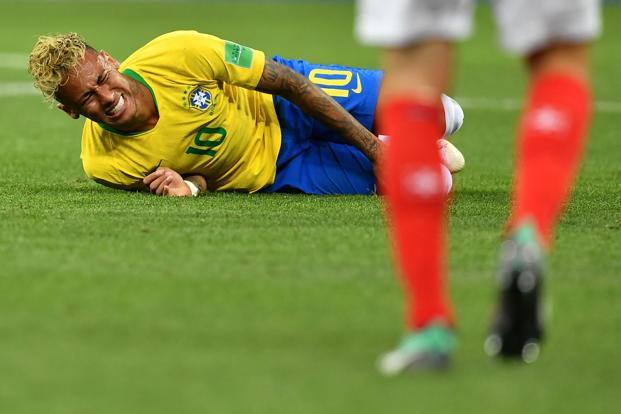 The PSG star, who broke a toe four months ago, limped out of training during the week with an ankle injury but is expected to retain his place for Friday’s game in St Petersburg.

Speaking at his pre-match press conference, Brazil boss Tite said: “He had a knock, but I think it was the first time in three-and-a-half months he played 90 minutes.

“Five matches is the minimum you need to be fully fit and he has already sped up the process.”

Neymar might be fit but Costa Rica coach Oscar Ramirez admitted the world’s most expensive player will be closely tracked, saying: “Maybe we will mark him with two men, we will see.”

Brazil’s 1-1 draw against Switzerland has heaped the pressure on the five-time holders to secure all three points against Costa Rica, who fell to a narrow 1-0 defeat to Serbia.

Costa Rica boss Ramirez has also had to play down claims there are divisions in his squad.

“It is true that some players are closer to other players but there are not different groups, there are no problems at all within the team,” he said.

“I haven’t had to intervene at all.”

“There were no clashes.”

“If clashes really happened then I haven’t seen anything and I can’t believe anything has happened because they are all very polite and very calm people.”

Serbia and Switzerland meet in the other Group E game later on Friday.

While Neymar is set to start for Brazil, there will be a change in defence as Manchester City full-back Danilo is injured. He will be replaced by Fagner.

Costa Rica are also likely to stick with the same side that lost to Serbia.

Brazil have won nine of their 10 previous internationals against Costa Rica, losing only in a friendly in March 1960.

This is the third meeting between Brazil and Costa Rica at the World Cup, with the former inflicting Costa Rica’s first ever defeat on them at the tournament in 1990 (1-0), before a 5-2 victory in 2002.

Philippe Coutinho’s goal against Switzerland was his 11th for Brazil – five of those have come from outside the box.

Costa Rica lost their first match against Serbia, ending a five-game unbeaten run at the World Cup finals – they haven’t lost back to back World Cup games since June 2006, when they lost four in a row.