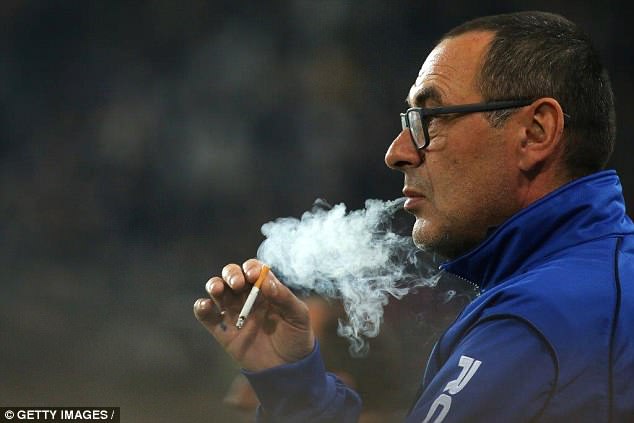 Aurelio De Laurentiis is hopeful Napoli head coach Maurizio Sarri will remain in charge next season, though the outspoken president insisted he cannot force the Premier League target to stay.

Napoli are set for their second runners-up finish in three Serie A seasons under Sarri, however, the Italian’s future is still far from certain amid links with English giants Chelsea and Arsenal.

Speculation of a move to the Premier League intensified following criticism from De Laurentiis, who blamed a lack of squad rotation for burning out the players after the club’s Scudetto hopes faded, with Juventus poised for a seventh successive title.

De Laurentiis is set for talks with Sarri – who has an €8million release clause in his contract – and he is remaining calm over the 59-year-old.

“Will Sarri be here for pre-season? I hope so,” De Laurentiis said. “I clearly have fewer doubts than you if you’re asking that question, but I can’t hold anyone by force.

“We have an appointment next week. Now we have to prepare for the away game [with Sampdoria], there’s travel and not much time.

“That’s why we’ve got an appointment for next week. But don’t worry, I’m calm. Is he the right coach? I chose him myself, against most people’s advice…

“Relationships are always about give and take, it’s never one-sided. I don’t think we can complain about the football story of the past three years, he’s built a nice style, hailed by everyone abroad.

“There are many who would like to imitate him but it’s really difficult, so we’re all grateful.”

De Laurentiis added: “Does Sarri want to leave? You don’t know Sarri, he’s devoted to his work and nothing else. It’s even difficult for his family to talk to him, so I try to interfere as little as possible. Then there comes a time when we have to talk, January for example.”

De Laurentiis appeared to play down Sarri’s achievements as he pointed to Rafael Benitez and Walter Mazzarri’s record at Napoli.

“We also won before with players of a lower level, a third of the salary – maybe even a quarter. We came second with [Walter] Mazzarri,” De Laurentiis said.

“Maybe the points we got before were different, even with [Rafa] Benitez. There are people who talk about bad relations with me but I can tell you that’s false. Mazzarri was here for four years, Benitez had a contract for two years with an option for another that I never thought he’d exercise because he was struggling being away from his family.

“We came fifth because of a few penalties, we didn’t do badly. When I took Sarri they put posters up around Naples saying I was an idiot and I didn’t react. Then after four games Sarri started an exceptional ride.

“We were a bit drained when we got to March and April [this season] because we had the Champions League preliminaries. We started early, so there was always a risk of that.”