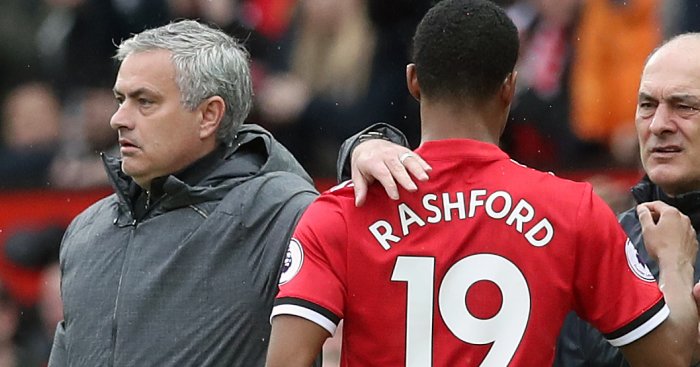 Rashford scored with two smart finishes on 14 and 24 minutes to sink Liverpool 2-1, but the England man was withdrawn on 70 minutes to be replaced by Marouane Fellaini.

And Mourinho has claimed that the decision to substitute Rashford was to bring on a player who “could make a foul on Trent Alexander-Arnold”.

Rashford was booked, but received a standing ovation on his withdrawal although some fans were not happy with Mourinho’s decision.

The 20-year-old, making his first Premier League start since Boxing Day, now has 12 goals in all competitions this season, making this his most prolific campaign to date.

“The fans they can do what they want, I’m not upset at all with that reaction,” Mourinho said.

“I heard Gary Neville was asking (on Sky Sports) for Marcus Rashford to get a red card and I was scared maybe the referee was watching it at half-time!” Mourinho continued.

“When we were more defensive in the second half, obviously, as Liverpool pushed for that situation, they brought a lot of players into central positions.

“Ashley Young had to come inside so Rashford was defending the corridor against Alexander-Arnold with a yellow card and with pressure.

“I made the decision to replace him with a player who could make one foul on Alexander-Arnold.”