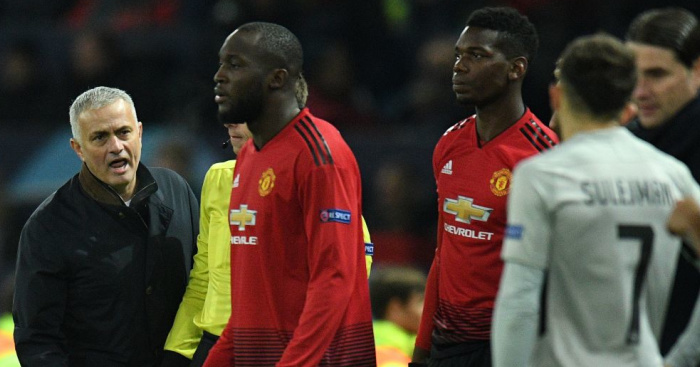 Jose Mourinho turned on the media over their constant questioning over his team selections at Manchester United.

The United manager kicked a water bottle carrier and threw another into the ground in celebration as Marouane Fellaini netted a last-gasp winner to send his side into the last-16 of the Champions league with a 1-0 win over Young Boys – ensuring their trip to Valencia next month is academic.

And having explained those actions, Mourinho then hit out at the likes of Paul Scholes and Gary Neville, suggesting neither show enough understanding of the pressures he is under as Manchester United manager.

It is not just critics that irritate Mourinho but questions, too, having raised eyebrows before the game by dropping Romelu Lukaku and Paul Pogba to the bench, with Alexis Sanchez missing out entirely.

“No, Sanchez is not injured, but it’s quite curious because you always speak about the ones that are not playing,” the United boss said. “Tonight, you had Marcus Rashford playing as a nine – that’s what you want, that’s what you ask for all the time and you had.

“So, don’t speak about Lukaku and you tell me Lukaku doesn’t score a goal at Old Trafford since March.

“And then you ask, ‘Why is he not playing?’ You put me in difficult situations with difficult questions, you go always, but you could be nice to me and say, ‘Jose tonight you play Marcus Rashford as a nine’ and I could go from there.

In what could be perceived as a direct reaction to Scholes and Gary Neville – who have regularly criticised the United boss in the past -Mourinho continued: “I think maybe it’s better to have lots of holidays in Barbados and go to the television screen and touch the electronic dummies.

“I think it’s much, much, much more comfortable than being on the touchline like we managers we are.

“I am pretty sure that a proper football manager would never criticise another one for emotional reactions on the touchline because it’s deja vu for them.

“For the ones that have a nice life, it’s different.”

Mourinho also had words of praise for David De Gea after the match, explaining why they owed him everything for their victory.