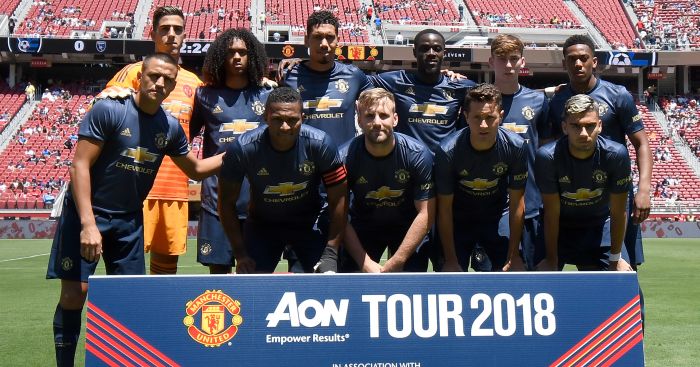 The Reds boss appeared completely unperturbed by United’s second consecutive draw on its US friendly tour, conceding: “We are not a team.”

With many of his best players missing the trip after World Cup commitments, the Portuguese appeared content that the squad – this time with Alexis Sanchez included – were able to get some practice in, if nothing else.

“We are not a team. We’re a group of players from different teams,” he told MUTV after the game.

“Some are first-team, some under-23s, some coming from loans and going on loan, some are younger, under-18s. We don’t have a team to play much better than we did but (it’s) one more training session.”

After missing the start of the pre-season tour due to a visa issue, Sanchez started for the Reds at the California Memorial Stadium on Sunday.

The Chilean made an attempt off a free kick in the 30th minute, but it sailed off high to the left.

Sanchez had a hand in another close miss by Luke Shaw after the break, but United could not break the deadlock.

“Good for Alexis,” Mourinho said: “He needed this and he made a good effort, a good physical effort, which is important for him in this moment.”

Andreas Pereira performed “okay” and the boss thought he could play “even more simply”.

“But he has the personality to want the ball and to organise. I’m happy,” he added.

A potentially worrisome moment for Mourinho came after seven minutes of play when Antonio Valencia limped off injured.

But again, the manager remained sanguine: “He’s injured and I think we need to get used to it,” he said.

“Last season he was already in this type of situation and this season he will probably have more of that.”

United next play Real Madrid on Wednesday at the Hard Rock Stadium in Miami.