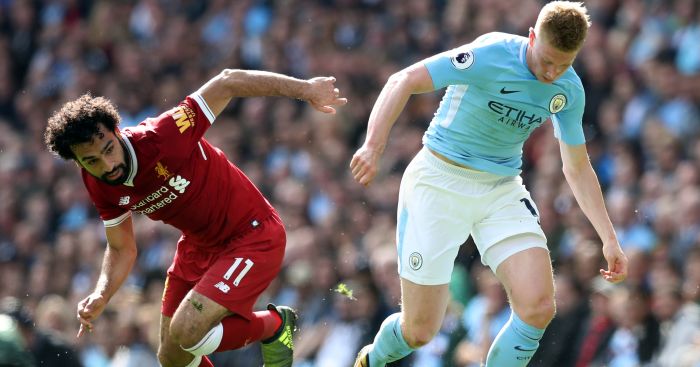 Mohammed Salah and Kevin De Bruyne, the two leading contenders for player of year, faced each other as Liverpool hosted Manchester City in the Champions League quarter-finals on Wednesday.

Here, we look at how they fared.

Salah took up his usual advanced position on the right and tore at City at every opportunity. There was little new about how he attacked but, like a number of teams this season, City struggled to cope with him. It was a surprise that he was given so much space in the build-up to the opener.

De Bruyne started in a deep central role, as he often has this season, but he was unable to get into the game as Liverpool made the early running. He switched to the right as City attempted to change things in the second half to little avail.

Salah was heavily involved in Liverpool’s attacks as the hosts hit City with force in the first half-hour. His runs were dangerous and his chipped cross for Sadio Mane’s goal, which showed his speed of thought after having his own shot blocked, was exquisite.

With Liverpool in control, De Bruyne found it difficult to get time on the ball. The likes of Jordan Henderson and James Milner were quick to close him down whenever he was in possession.

Once again Salah showed composure in front of goal when the chance to open the scoring fell to him. Salah had already played a key part in the attack, feeding Roberto Firmino, before the ball came back to him after Kyle Walker got it tangled under his feet. Other defenders were scrambling back but Salah did well to flick home his 38th of the campaign.

City rarely threatened Loris Karius’ goal and De Bruyne had no opportunities in front of goal.

Salah’s impact was devastating and City could not contain him. It was to the visitors’ relief his involvement was curtailed as he was forced off injured early in the second half.

De Bruyne was unusually subdued as Liverpool refused to allow him and David Silva to dictate play, as they so often have this season. It was a disappointing display from the Belgian.