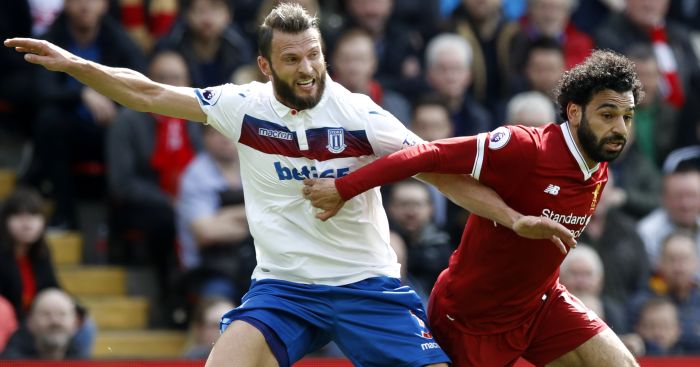 Liverpool star Mo Salah faces an anxious wait to see if he could be banned from the club’s final two Premier League games.

And that news will come as a huge boost to Tottenham frontman Harry Kane, as looks to haul back Salah’s five-goal lead in the race for the Golden Boot.

FA disciplinary bosses are reportedly expected to refer Salah’s clash with Stoke defender Bruno Martins Indi during Liverpool’s 0-0 draw on Saturday to the three-man panel of ex-referees to rule if it was a red-card offence.

The FA are said to have been alerted to social media clips of the incident, in which the Egyptian sensation appeared to throw his arm into the Dutch star’s face near the half-way line.

Referee Andre Marriner did not spot the incident, which took place just before half-time of the game at Anfield.

Under FA rules, potential violent conduct incidents missed by officials during the game can be referred to the panel of former refs, who must then unanimously agree it was worthy of a red card.

A suspension would also end Salah’s chances of scoring the goal he needs to become the first player to score an incredible 32 goals in a 38-game Premier League cmapaign.

Kane, meanwhile, has four games left to try and haul back Salah – starting with a clash against Watford at Wembley on Monday night.