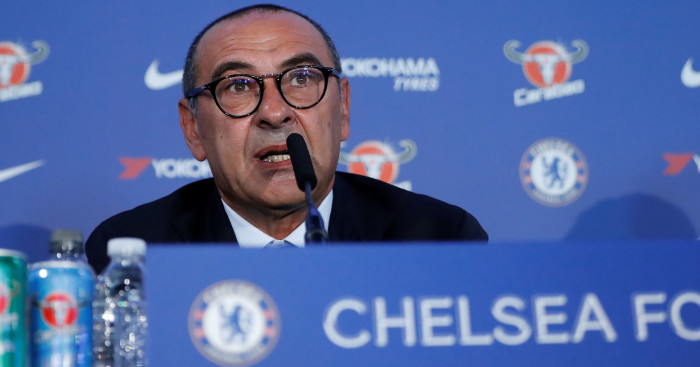 Maurizio Sarri has fueled speculation that Eden Hazard and Thibaut Courtois are set to join Real Madrid this summer after admitting he cannot to give guarantees over either of their futures.

The Blues duo have both been linked with summer moves to the European champions, with a £31m deal for Courtois said to be on the brink of being finalised.

Hazard, meanwhile, has also been strongly linked with a £175m move to the Bernabeu as Julen Lopetegui’s side seek a replacement for Cristiano Ronaldo after his €103m switch to Juventus.

Speaking at his unveiling as Chelsea head coach at Stamford Bridge, Sarri told a media conference of his disinterest in the transfer market.

After an opening address in English, Sarri spoke in his native Italian, saying: “Clearly we would always like to keep all the strongest players. This is what any manager wants to do, this is what any club wants to do.

“Then we will have to see how the transfer market will go over the next few days.

Sarri would not respond to further transfer questions, but did cast doubt on the futures of his defenders.

“I cannot name any names because I don’t know who these people are,” Sarri added.

“I spoke to the football club and I said a pinch of quality is lacking in centre halves for a certain kind of play. Otherwise they’re at a very high level.

“At the end of the transfer window it will be up to me.”

Asked specifically about club captain and Chelsea’s longest-serving first-team player Gary Cahill, who was on Tuesday linked with a move to Manchester United, Sarri said: “With respect to Cahill, I think he can still give us a lot.”