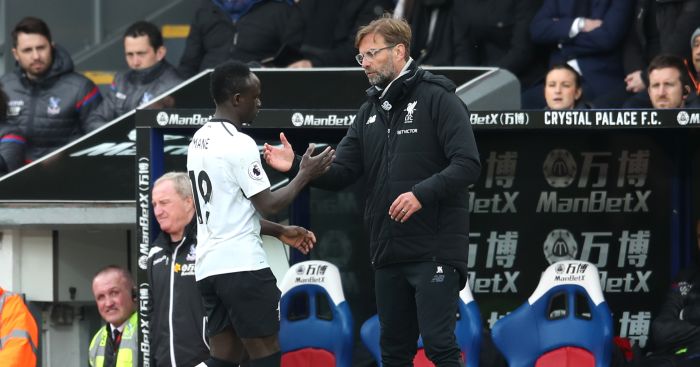 Sadio Mane has launched a strong defence of his actions after a controversial display at Crystal Palace where he was branded a ‘cheat’.

Mane enjoyed an eventful afternoon at Selhurst Park on Saturday after he booked for diving, then had a goal ruled out for offside before slotting home the equaliser early in the second half, while he could also have been red carded for deliberate handball.

On the diving claim TV and radio pundit and ex-Liverpool midfuielder Danny Muprhy fumed at Mane for his theatrical fall.

“I thought the referee got this right,” Murphy explained on BBC’s Match of the Day. “There was contact. But the delay in going down meant for me it was a dive and a yellow card.

“I still think that’s cheating and that’s a dive and a yellow card.”

But Mane insists he should have had a penalty when he was cautioned for simulation.

“Honestly, I was thinking he was going to give a penalty,” Mane told the Liverpool Echo.

“He didn’t give it but I was not focused on that because it’s part of what can happen. I could have been lucky but it’s part of football. I was doing my best and in the end I scored a goal.

Palace were also left fuming that Mane wasn’t sent off for a second yellow after handling the ball just outside his own box when he failed to win what looked like an obvious free-kick – Jurgen Klopp then responding by substituting him soon after.

“I was not worried (about the handball). I was surprised he didn’t give the foul but in my mind it was not a red card or something because I was sure that this was a foul.

“I’m someone who believes in myself, and I believe in the qualities of my team-mates. I know what they can do. At 1-0 down I was thinking ‘we can come back’. We did the job.

“We got our reward in the end and we deserved to win. It’s a big step towards the top four. We are going to take it game by game.”