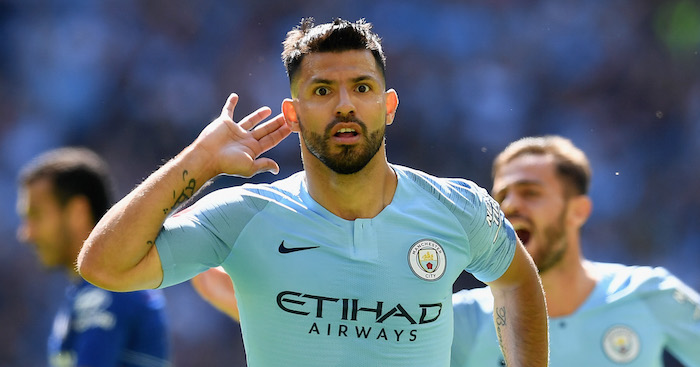 The Argentina striker, the club’s record goalscorer with 204 goals, joined the club in a bargain £38million deal from Atletico Madrid back in 2011.

But with his current contract due to expire in the summer of 2020, City have learnt that the striker is likely to leave the club and head home to his native Argentina.

Aguero will be 32 when his contract expires and it’s been reported that City will let him leave on a free – most likely to boyhood club Independiente – as a goodwill gesture and as thanks to his incredible service to the club.

That intention was as good as confirmed by Aguero earlier this year when he said: “My contract with Manchester City will expire in 2020, then I will return to my home at Independiente.”

As a result, Metro claims that City have already begun the process of identifying Aguero’s long-term replacement at the club – giving Guardiola and the club’s director of football Txiki Begiristain a maximum of four transfer windows to land his replacement.

And according to the outlet, Guardiola wants that man signed as soon as next summer – and the City boss has set his sights on signing a man already recognised as one of the best.

And that man in question is Tottenham striker Harry Kane, whose abilities have often drawn public admiration from the City boss. However, it’s widely acknowledged that a potential deal for the England captain would likely to cost north of £200m and negotiations with Spurs would prove difficult given he’s just signed a new long-term deal.

Harry Kane Tottenham
Guardiola, however, likes to sign replacements for his key men well in advance in order to ensure disruption is kept to a minimum: Aymeric Laporte was brought in from Athletic Bilbao as Vincent Kompany’s long-term successor, while Riyad Mahrez was signed as the man to eventually fill David Silva’s boots.

But with a move for Jorginho falling short over the summer, and the player instead opting for a move to Chelsea, the City boss is expected to prioritise the signing of a top-class holding midfielder – and long-term replacement for Fernandinho – during the next transfer window.