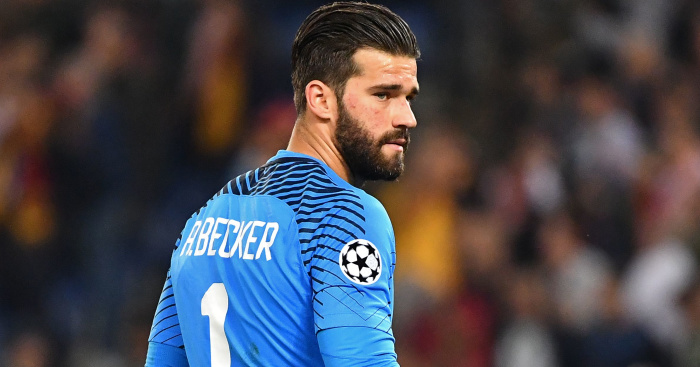 Liverpool are reported to have moved ahead of Chelsea for Alisson on the day the agent for the goalkeeper met with Roma officials on Tuesday to discuss his client’s future.

Liverpool and Chelsea have both been linked with a move for the Brazil stopper, who has a huge €70million release clause in his contract.

And reports in Italy claim the Brazil No 1 has instructed his representative to inform the Serie A club that he wants to be allowed to move to the Premier League this summer.

In addition, Sky Italia claims Liverpool will win the race to sign Alisson after the Reds reportedly lodged an offer of £62m plus add-ons on Tuesday afternoon. That is apparently only £4m short of Roma’s asking price and already some distance better than the opening £44m gambit Chelsea made prior to the World Cup. And now BBC Sport have reported the story.

Liverpool’s interest in Alisson has been well documented, with Jurgen Klopp seeking a new No 1 to replace the error-prone Loris Karius, while Chelsea have also watched his situation closely as they seek a new first-choice keeper in light of Thibaut Courtois’ imminent exit.

Reports in Spanish paper Marca claim Courtois is “on the brink” of finalising a €35m switch to the Bernabeu to become the European champions’ new No 1 and net the return to Madrid the Belgian has been craving.

Real had been linked with Alisson too, but their decision to pursue a deal for Courtois instead, who at €35m is likely to cost half the price, frees up the Blues to seek a new No 1.

Talking just last week, Roma director of football Monchi said of his goalkeeper: “He [Alisson] has the same chance of staying as all the other players we have not received any offers for.

“If one arrives, we will study it and make a decision. We are working out when he will return to training after his post-World Cup holiday; ready to do even better than he did last season for us.”

But if reports are right, it seems a move to Anfield will be finalised before the transfer window shuts – leaving Chelsea to look elsewhere in their hunt for a new No 1.