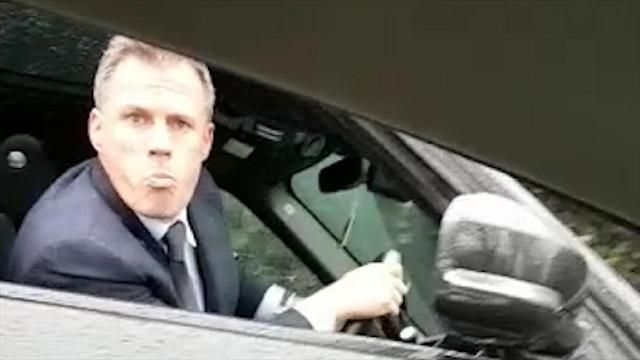 Sky Sports are set to hold a crunch meeting with Jamie Carragher amid claims in The Sun he faces the sack from his role as a pundit.

The news comes after the former Liverpool star issued an apology to a teenage girl and her family after he spat in her face on Saturday.

The former Liverpool star was caught on camera aiming a mouthful of saliva at the passenger window of a car containing the 14-year-old Manchester United fan and her dad after Saturday’s win for Jose Mourinho’s men over the Anfield outfit.

She claimed the spit hit her on the forehead and made her cry.

The dad said “a bit of banter” with the former England defender turned ugly after he mentioned the 2-1 scoreline. And he insisted the TV pundit must have seen his daughter in the passenger seat.

Carragher, who had been covering the match for Sky Sports, phoned the girl and her father on Sunday night and said in the report in the Daily Mirror: “I just want to apologise and I hope you are OK.” The youngster told him: “OK, thanks for apologising.”

Now, according to The Sun, Carragher faces a crunch meeting with Sky Sports bosses where he will be disciplined for his actions and possibly face the sack. It is not yet known, though it appears unlikely, if Carragher will be on duty for Monday Night Football when Stoke host Manchester City at the Bet 365 Stadium.

Carragher had earlier admitted he was in the wrong but claimed he lost the plot after the so called banter went on too long.

The 40-year-old said: “It was a bit more than, ‘Hiya Jamie, it was 2-1’. It went on for two or three times. I drove away at first and it just continued. I lost my head. I shouldn’t have done it but I was thinking what is a grown man doing, carrying on like that two or three times with his daughter in the car?”

A Sky Sports spokesperson said: “It’s unacceptable behaviour and we will be addressing it with Jamie.”

In footage of the incident shot by the girl’s dad, she can be heard admitting: “He spat on me.” He asks her: “Where did it hit you?” She replies: “On my face.”

The girl’s 38-year-old mum was furious at Carragher for ­spitting at a child.

She added: “I was extremely angry and disappointed that he could even bring himself to do something like that. Looking at her, you know she is a child.

“What did she do wrong? She did not do anything wrong. Spitting at someone is the lowest of the low. It is disgusting.

“In all the years I’ve watched football, isn’t it all about banter?

“And he could not take that little bit of banter? It was nothing. I could ­understand if someone was in his face, giving him abuse.”

The schoolgirl told of her shock after the incident. She said: “I have never been spat at by anyone before. I thought, ‘Why has he done that’. I thought I had done ­something wrong.

“People in school take the mick and it is just a laugh. Someone like him who is older should be able to take a joke.” Her dad told how they spotted Carragher about two miles from Old Trafford after the clash.

He said he took his phone out and started filming. In the footage, Carragher appears to lower his window and the man winds down the glass in the passenger door.

The United fan added: “He looked at me and waved, I waved back and then he put his window down.

“And he could not take that little bit of banter? It was nothing. I could ­understand if someone was in his face, giving him abuse.”

The dad claimed moments later Carragher pulled up on the driver’s side of his car and gave him a thumbs up. He added: “I was angry and upset because my daughter was crying. I could not believe what had happened.

“She was crying. She said, ‘I’m ­embarrassed, he has just spat in my face. I don’t want to talk about it.’”

But both the mum and dad thanked Carragher for phoning and apologising for the incident.