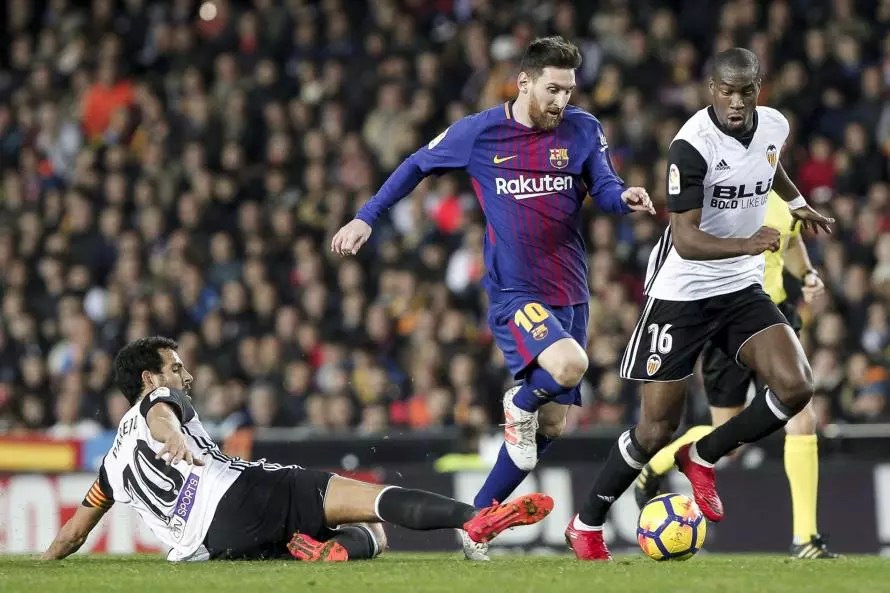 Ernesto Valverde said he was going to rotate his squad with a view to the Copa del Rey final on Saturday in mind, and he was true to his word.

An entirely different back four was just the start, as the coach rested all of his big names. It almost back-fired but the Blaugrana deserve credit for the way in which they stuck to their task.

A task that was made even harder when sub Sergi Roberto was red carded just six minutes after coming on.

Barca took the game to their hosts from the off, and though Celta had chances too, Ousmane Dembele’s well struck half volley was a fine way to put them ahead.

Andre Gomes’ baffling square ball right on half-time saw the hosts break at lightning speed, and Jonny’s last touch of the half equaliser was probably a fair reflection.

Once Lionel Messi and Roberto came on, it fired Barca up and they were ahead again within three minutes thanks to Paco Alcacer. Roberto then hauled Iago Aspas to the ground in a one on one, and it was backs against the wall time for the visitors.

Aspas grabbed another equaliser with eight minutes left, and the Galicians missed a glut of late chances to end Barca’s epic unbeaten run which now stands at 40 La Liga games.

Real Madrid get out of jail against Athletic

This was supposed to be the game where Los Blancos flexed their muscles to let Bayern Munich know that they are going to be in a battle, but on that performance the Germans have nothing to fear.

Although Ronaldo hit the bar in the ninth minute, Inaki Williams’ sublime chip over Keylor Navas on 14 quietened the Bernabeu.

An open, attacking game, for long periods the advantage swung back and forth, but with no further goals scored.

Raul Garcia then smashed one off of the bar himself, just to let Real know that the Basques were still alive to all of the possibilities in the game.

Zinedine Zidane responded by bringing Gareth Bale and Isco on for Marco Asensio and a disappointing Karim Benzema, whose days in Madrid are surely numbered.

As the clock ticked down, it appeared that Athletic would notch a famous away win, but a moment’s lapse of concentration saw Real draw level.

Luka Modric’s shot from outside the area was fired into a crowd of players and who else but Ronaldo just threw out his foot and diverted the ball into the net.

It was scarcely deserved and harsh on the visitors.

Depor pick up another point against Sevilla

Vincenzo Montella also rotated his Sevilla squad in order to keep his troops fresh for their cup date with Barcelona.

He’ll be none too happy with a point at Depor mind, because, should they lose the Copa del Rey final, there’s no guarantee they’ll get a Europa League place through their La Liga position.

Two thirds of the possession was to be expected, but they only managed the same amount of shots on target as the hosts.

Clarence Seedorf’s Depor side are building up a real head of steam now, and have given themselves a real shot at safety with five games left to play.

Celso Borges might even have won it for them on 87, but his shot crashed back off of the woodwork.

Nevertheless, the Galicians have played with more confidence and desire over the last three games, than they did in the previous 15.

Special mention to Adrian Lopez, the game winner in the last two matches, and who was a constant thorn in Sevilla’s side.

Valencia stunned at home by Getafe

No losses for nine games, and then Valencia are beaten twice in less than a week. The defeat at Barcelona might well have been predicted, but this 2-1 home loss to Getafe will really hurt Marcelino and his side.

Although fourth place is almost certainly assured for Los Che, a good final few games might well have seen them leapfrog Real Madrid and perhaps even Atleti.

That’s more unlikely to happen now, despite Real’s result, and they’ve only got themselves to blame.

Right from the kick-off you could sense, from the Mestalla stands to the pitch, that this was an expected three points, but as so often happens, complacency comes back to bite you.

When Loic Remy put the visitors into the lead just after the quarter hour, you could’ve heard a pin drop.

Far from inspiring them to dig in for battle, it seemed to have precisely the opposite effect. It was the team from Madrid that were racking up the yellow cards but at least they were showing heart.

Valencia kept the ball for the most part but couldn’t do anything with it. Worse was to follow as Remy doubled the lead after half-time.

With 20 minutes left, Rodrigo gave the hosts some hope, but Getafe held firm. A late Dani Parejo red card could hurt Los Che in their next game too, the captain being one of their most creative players.

A narrow 2-1 victory over Leganes was enough to keep the supporters happy at the Estadio de la Ceramica. With Sevilla breathing down Villarreal’s necks, a win for the Yellow Submarine was imperative – but they almost blew it.

Victor Ruiz got on the end of Mario Gaspar’s cross just before the break to give the hosts a half-time lead, but Leganes came back into the match much more in the second half.

Though Carlos Bacca doubled Villarreal’s lead on 55, they never really looked comfortable and once Darko Brasanac had pulled one back on 82, the pressure came only from the visitors.

To Villarreal’s credit, they held firm against the bombardment, and the three points keeps them nicely tucked in the Europa League places with five to play.