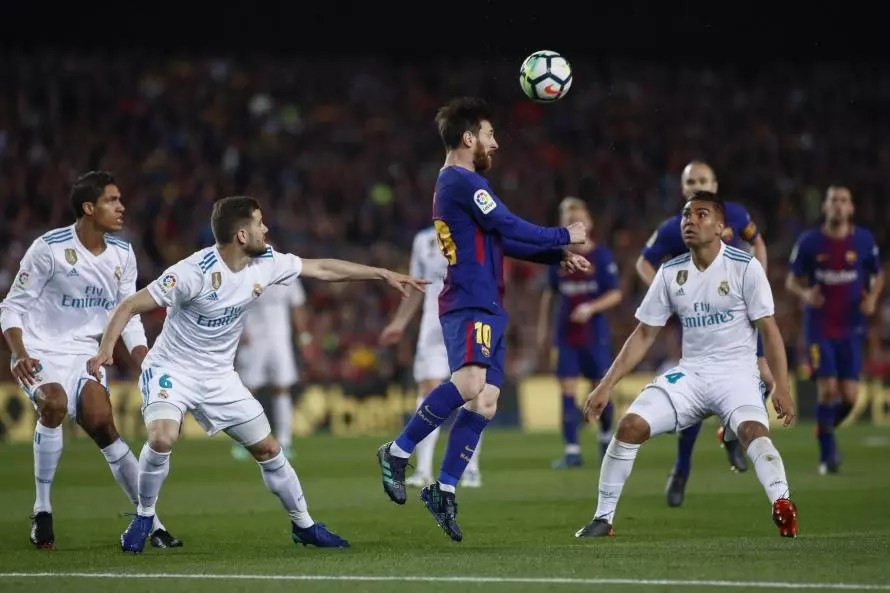 In what was a feisty El Clasico considering there was nothing more than pride at stake, Barcelona continued their unbeaten run despite being down to 10 men for the whole second half.

It was the hosts who struck first when a lovely flowing move saw the ball played wide to Sergi Roberto. His exquisite cross found Luis Suarez after Lionel Messi took two players with him leaving the Uruguayan on his own.

Cometh the hour, cometh the man, and just four minutes later, the Blaugrana were carved open and Cristiano Ronaldo, who else, equalised, with what was his 22nd goal in the last 13 games.

In so doing, he appeared to injure himself, and was replaced at half time as a result.

Just before the break, tempers became heated and a flurry of yellow cards were produced by referee Hernandez Hernandez.

A horrible Gareth Bale lunge on Samuel Umtiti went unpunished, and in the next play, Sergi Roberto received a straight red for a push on Marcelo. Replays would show the Brazilian had made a meal of it, but it was still a sending off offence.

Up against for the entire second half, Barcelona somehow managed to edge ahead again. Suarez turned provider this time, and Lionel Messi curled in his 26th in this fixture to put his side 2-1 up.

Just as the hosts were getting on top, a phenomenal first-time finish from Bale meant we were all square again, and still with half an hour to play.

Los Blancos were certainly in the ascendency, and Jordi Alba was incredibly lucky not to have a penalty given against him.

In the end, the draw was probably the fairest result, and means Barcelona are only three games away from going an entire season unbeaten.

In their penultimate league game of the 2017/18 season, Atletico Madrid succumbed to their first defeat at home in the competition this season.

It was also the first time the Rojiblancos had conceded at the Wanda Metropolitano in the league since mid-January.

An unusual 3-1-4-2 formation by Diego Simeone didn’t suit the players, who weren’t helped when Vitolo had to be subbed off on 26.

A warning was fired a few minutes later when Gerard Moreno saw his shot come back off of the post, but Atletico didn’t heed it.

Within eight minutes of the restart, some more pressure from the visitors saw Stefan Savic put the ball past Jan Oblak to give Espanyol the lead.

The visitors continued to dominate possession and had more shots on goal than their hosts.

Filipe Luis, normally so reliable, didn’t look at it, perhaps rushed back too quickly after injury. He was replaced by Gabi, and along with fellow sub Saul Niguez, Atleti looked to flood the midfield.

For once, they were out-thought and out-fought, with Carlos Sanchez and the two front men for the Periquitos, Moreno and Leo Baptistao, the standouts.

It was the latter that would eventually put the game to bed, firing home from Oscar Melendo’s assist.

David Gallego’s side deserved the victory and it gives Simeone some food for thought ahead of the final few games.

Villarreal leave it late against Valencia

With European football at stake, this was always going to be a battle royale, and so it proved.

Five first half yellow cards were justified as tackles flew in at an alarming rate.

The match between sixth and fourth threatened to boil over on numerous occasions and at half time the teams were still level, despite the best efforts of Denis Cheryshev and Carlos Bacca.

Chances came and went for both sides in the second half and the game was drifting towards a goalless draw until Villarreal were awarded an 87th minute free-kick.

Floated dangerously into the box, Mario Gaspar rose highest, and his glancing header drifted agonisingly past the despairing dive of Neto.

Athletic’s best performance of the season takes care of Betis

Given the form of both sides, most would’ve expected an away win at San Mames, and maybe Real Betis thought the same.

There’s no other explanation as to how meekly they surrendered against an exuberant Athletic Club.

Though the goals came late, the result was never in doubt.

Inaki Williams and Mikel Rico had already seen shots crash back off of the bar before the break, with the keeper well beaten on both occasions.

Ex-Barcelona captain, Carlos Puyol, was honoured at half-time, Athletic awarding him their ‘One Club Man’ trophy, something they do each year to a worthy recipient.

A flurry of second-half substitutions didn’t interrupt the flow of the game, and it was only a case of when, not if, Athletic would score.

Lekue’s delicious cross found Iker Muniain unmarked at the back post for the opener on 76.

Kepa was then kept busy by Betis as he pulled off a string of saves.

Fabian Ruiz did manage to beat him, but his long ranger also found the bar, as did Javi Garcia’s injury time header.

From the resulting breakaway, Inaki Williams teed up Aritz Aduriz to slot home and seal the win for the hosts.

Sevilla looked a totally different outfit from the one who played under Vincenzo Montella.

Joaquin Caparros had the Andalusians organised, defensively sound and a threat on the attack.

The hosts had already come close on two or three occasions and would eventually open the scoring just after half time.

Sandro Ramirez was felled in the area and Ever Banega made no mistake from the spot, sending an already bouncing Ramon Sanchez Pizjuan wild.

It wasn’t long before Caparros’ name was being chanted, Sevilla holding on for their first win since knocking Manchester United out of the Champions League back in mid-March.