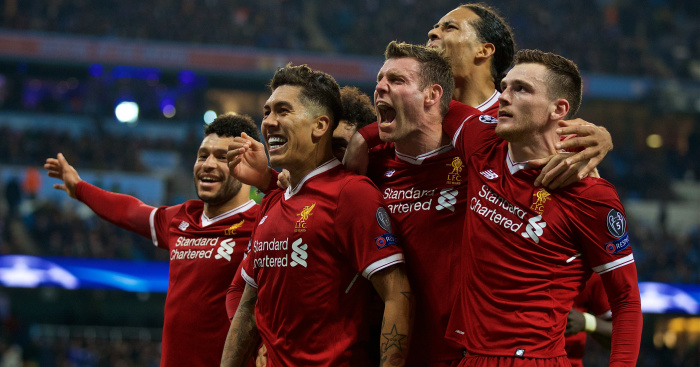 Jurgen Klopp has explained what he said to inspire his players as Liverpool came from behind to beat Manchester City 2-1 to reach the Champions League semi-finals.

The Reds had gone into the match with a 3-0 lead from the first leg at Anfield, but an early Gabriel Jesus goal put the frightners on Liverpool as Pep Guardiola’s side dominated the first half to give themselves hope of a revival.

But Klopp’s team came out for the second period with much more fire in their bellies and Mohamed Salah’s composed finish, before Roberto Firmino’s strike secured Liverpool a comfortable-looking 5-1 aggregate success.

Speaking on BT Sport after the game, Klopp revealed what he said to his players to inspire them to victory after a disappointing first half by their usual standards.

“First of all you have to learn from the game, so I have no problem with conceding the early goal – of course it’s not what you want, but if it happens then you have to react,” he said.

“So the reaction at first was OK but then it wasn’t OK anymore.”

It seems Klopp was frustrated that his players were getting involved in silly spats with the Manchester City players, and told them that he wanted them to focus on the task at hand.

He added: “If they want the ball from you, then they have to kill you, there’s no other chance for them to get it. And in a few moments it was too easy.

“We needed to be more compact, we shouted like crazy about offsides but we needed to push up.”

“[I said] we needed to stay in that football playing way, to show we want the ball and not hoping that somebody finds Mo or Sadio or whatever then we can go up to [score].

“So we needed to start new, and that’s what the boys did, that was clear, we all knew that. If you don’t score the second and the third then it’s not easy again.

“We knew if we could score one more then the atmosphere would be very different.”

Klopp, meanwhile, has been asked how his Liverpool side compare to some of the world’s best