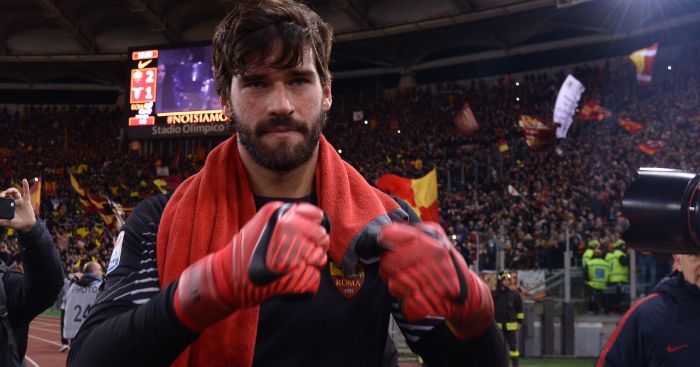 Roma have no intention of selling Alisson Becker this summer, according to the Serie A club’s chief executive officer.

The Brazilian goalkeeper is highly coveted with Real Madrid and Liverpool understood to be chasing the 25-year-old.

The interest from the Spanish champions has caught the attention of Alisson, and the keeper admits he is flattered by talk that he could be brought in as Keylor Navas’ replacement this summer.

“Those links massage the ego, it cannot be denied,” Alisson told Globoesporte over the weekend. “People get satisfaction from having recognition. I feel very happy to have that recognition.

“It means that I am doing my job well, that they are watching me. Even more so when one hears about Real Madrid.”

And to make matters worse now for Liverpool, Roma chief Umberto Gandini says they have no plans to sell their best players.

“We are not thinking about selling our best players. Right now we are living a very important phase of our season. This club have always changed many players to improve. The transfer window is dynamic, there are big teams that change their identity to improve and not for economical reasons,” Gandini told Radio Rai.

Over the weekend, Don Balon claimed Liverpool were ready to test Roma’s resolve to keep Alisson by launching a massive €80million (£70.5m) offer to the Serie A giants.

Alisson has emerged as Jurgen Klopp’s No 1 target this summer, after the German decided he needed a long-term replacement for both Simon Mignolet and Loris Karius.

While Karius has now established himself as the club’s No 1, Klopp is aware he will have to shell out to shine a world-class goalkeeper if the Reds are to challenge Manchester City for the Premier League title next season.

And while the Reds boss was already prepared to have to spend a world-record fee to land the keeper this summer, it’s likely his fee is set to climb further due to Real’s interest in the star.

Roma reportedly rejected a €40million offer Napoli for Alisson last week, but if Liverpool come up with €80million for the player it may just prove too good to refuse.