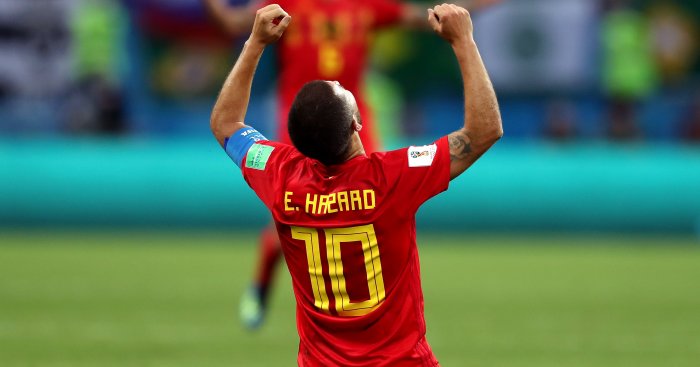 Real Madrid reportedly ready to meet Eden Hazard’s entourage on Saturday to discuss a summer move to the Bernabeu.

After the €112million sale of Cristiano Ronaldo to Juventus, Florentino Perez and Julen Lopetegui are looking for a replacement and long-time Real target Hazard is the man they want.

Sky Sport Italia claim Hazard wants to make the move to La Liga, but the Blues are believed to want nothing below €220m for the Belgium attacker, according to Il Corriere dello Sport.

Real Madrid will meet Hazard’s lawyers as well as the player’s agent/father this weekend to try and hammer out a deal, but the report claims Real are only willing to put €120million on the table.

Therefore the proposal from the La Liga giants is likely to drop well short of Chelsea’s valuation.

And now the Evening Standard claim Real are armed with an £112million bid for Hazard – slightly more than the €120million (£107m) than has been reported in Italy.

New Blues boss Maurizio Sarri has declared his intention to speak to Hazard face to face to discover where his future lies.

But it appears that Hazard is contemplating life after Stamford Bridge.

Last week he told Belgian newspaper HLN: “After six wonderful years at Chelsea it might be time to discover something different. Certainly after this World Cup.

“I can decide if I want to stay or go, but Chelsea will make the final decision – if they want to let me go. You know my preferred destination.”