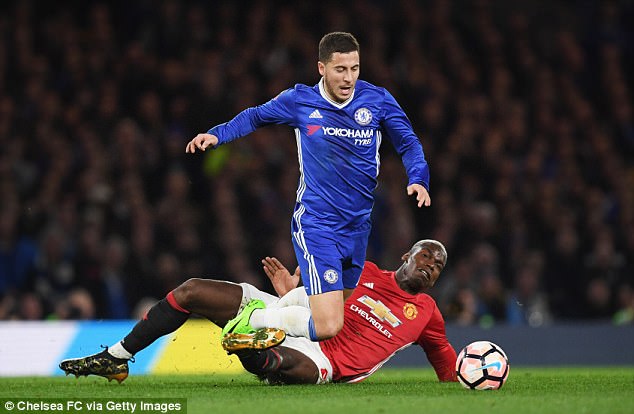 Is it harsh to say that Eden Hazard has been letting Chelsea down? Not according to the man himself, speaking prior to Sunday’s 2-0 FA Cup semifinal win over Southampton, in which he set up both goals, was named Man of the Match, and played very well indeed.

“It’s not been so good, no. I was injured at the start of the season and it was not easy to come back after that. I then played the first two months of the season really well, but when the team needed me in the game against Barca in the Champions League I didn’t ­perform well.

“I don’t think I have played well for the last two months. Yes I have scored some goals – that’s why I am on the pitch – but the thing I want most is for my team to win. When we are not winning, I cannot be happy. We are fifth in the Premier League and we are out of the Champions League. We didn’t win the League Cup. So it is a bad season.

“I can score 50 goals – but that isn’t important. The most ­important thing in football is to win something for my team.”

Hazard putting team first is nothing new. It’s part of what defines him as a player, though it’s also often brought up as a reason why he has never reached the ultimate levels of Messi and Cristiano Ronaldo. Not selfish enough, or some sort. But sussing out,  it’s not just about scoring, about selfishness. It’s also about consistency. And this season Hazard has not been as consistent as Antonio Conte needed him to be.

“Yes, of course [this shows what we’re capable of]. We gave everything until the end. We played the second half very well, we got the goals and we controlled the whole game so we are satisfied.” – Eden Hazard stressed after a dickty performance.

That’s not to say that Hazard blowing hot or cold is the sole reason Chelsea are in this situation. Every player, except maybe N’Golo Kanté has had multiple below par performances. League performance is defined by consistency; Chelsea did that amazingly well last season, not so much this season.

But Hazard is also more important to the team than most, especially in attack, which centers around him regardless of who or how the rest line up. How Hazard goes, the rest follow. If he’s on point, Chelsea can perform like on Sunday. If he’s not, Chelsea will look more like the one that that lost to Bournemouth and Watford in October; conceding seven in seven days.

“With Eden Hazard, sometimes you can tell in the first five minutes of the game by his body language and his direction what kind of mood he’s in. We saw that instantly. When he’s like this, he plays his own game differently to everyone else on the pitch. He’s quicker and he was the catalyst.” Chelsea legend, Frank Lampard accessed and he wasn’t far from the cold turkey.

Yesterday, the real Eden Hazard showed up. He wasn’t hiding, he wasn’t shying away from taking on defenders, he wasn’t afraid to shoot, he was direct, he was quick, and he certainly looked motivated. And he still found time to set up teammates, the help in transition, and when Willian was (surprisingly) taken off, he moved centrally to help shoulder the load there, too. He single-handedly got three players booked and he came within a few inches and the width of Maya Yoshida’s boot of scoring a hat-trick. He led the team in shots, in dribbles, in “key” passes, and even in touches though Fàbregas got only 75 minutes while Hazard played the full game.

In fact, just that fact, that he played the full game is worthy of note, since he’s substituted more often than not. This season, he’s finished just 18 of his 38 starts, which is actually up from last year’s ratio, when he finished just 13 of his 39 starts.

Of course, for Hazard it’s also always about fun, so there was room for plenty of flicks and tricks and a Rabona as well. But when all the other things are going right, there is certainly room for the fun stuff as well. This is what makes the Belgian wizard tick.

So while a slim chance of a top four finish remains, the emphasis will now be on the return to Wembley on May 19. Already an historic date from 2012; now a chance to make it even more special. After all, Sunday’s performance won’t matter a bit if Chelsea can’t finish the job in the final just like they did a year back versus Arsenal and Hazard did not hold back his thoughts about it;

“We have ­revenge to think about in this competition. If we want to forget losing the final last season, then we must play in the final and win. We played a fantastic game in the semi-final last year against ­Tottenham – but we lost the final, so, in the end, it didn’t matter.

“This is my sixth year with ­Chelsea and I’ve never won the FA Cup, so this would be a good year to put that right.” Hazard said that same thing about the Champions League and that will now have to wait a couple years, probably. The FA Cup might help fill that void for now, at least partially.

The real Hazard did not show up against Barcelona.

If he shows up against Manchester United, the trophy might just end up in London.