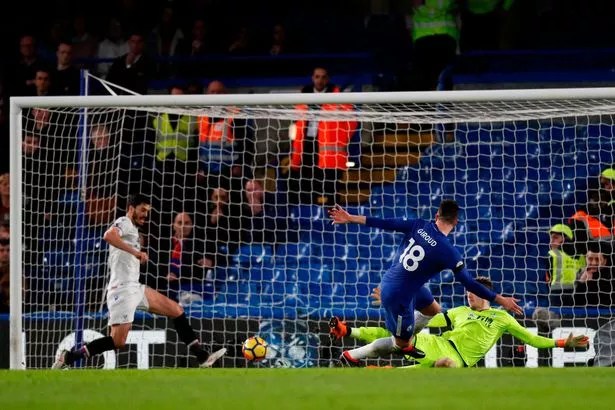 In Chelsea’s 2-1 win over Crystal Palace on Saturday Olivier Giroud proved why he must start against Barcelona in the Champions League last 16 second leg on Wednesday night.

The Blues go into the game following a 1-1 draw at Stamford Bridge in the first leg and know that they have to at least score with the away goal rule currently not in their favour.

Chelsea fans have become a little tired of some of the performances of Alvaro Morata, and since Giroud’s arrival in January there has been a lot of optimism about the way he has played and the way he has conducted himself.

The Frenchman has shown himself to be a real battler on the pitch, willing to work hard off the ball and on it show the quality to bring the other players into play when he can.

Blues supporters are desperate not to see the false nine role again for Eden Hazard and at least see Morata or Giroud lead the line and on Saturday’s showing, Giroud must certainly be the front-runner

.It was a promising start from Davide Zappacosta on the right in the fifth minute as he got a cross in to Giroud, but the header was behind him and he couldn’t get it on target.

The Frenchman really should have done better early on when the ball was fired towards goal by N’Golo Kante and Giroud tried to volley on the swivel, but he missed his effort.

It was a slightly frustrating start to the game for the Frenchman, as he was getting into the box, but the crosses weren’t really good enough to fall to him.

One of the most pleasing aspects to his game as been the link up with Eden Hazard and Willian, which he showed with a lovely little lay off to the former in the 20th minute.

But the other thing that is really catching the eye of the Chelsea supporters is his impressive work rate. In the 30th minute, Giroud was guilty of holding on to the ball for too long and losing possession. However, he chased right back to help get it back, before bursting forward as Chelsea sprung a counter attack.

Giroud continued to work hard, however the chances weren’t really going his way. At one point he missed his kick for a shot, but tried to recover with a crunching challenge to win the ball back.

Then came his big moment in stoppage time of the first half after he was played in by Eden Hazard. The striker managed to get his shot past Wayne Hennessey, but James Tomkins was there to wonderfully clear the ball off the line.

After the break, the Frenchman continued to work hard both with the ball and without and showed some good skill on the counter attack. In the 51st minute he got down the left and then crossed into Willian, who should have done better with his effort.

Then just four minutes later, he showed why he should have started against Manchester City. At the Etihad Stadium, the Blues had no out ball with City pressing so high up the field. But with one ball yesterday, Courtois found Giroud who flicked it on to Hazard, but the Belgian’s effort was saved by Hennessey.