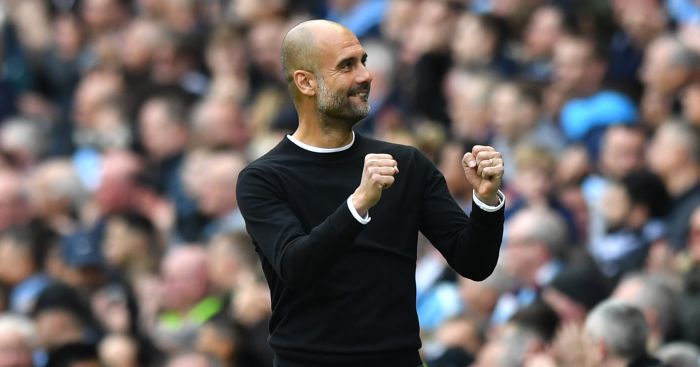 Pep Guardiola challenged his Manchester City players to prove they are the best ever after easing to victory at West Ham.

The newly-crowned champions passed a century of goals on their way to a 4-1 win at the London Stadium and are close to breaking Chelsea’s Premier League record points haul.

City need one more win to break Chelsea’s points record of 95 and two more goals to overtake the Blues’ Premier League high of 103.

Guardiola’s side host Huddersfield next Sunday – when they will be presented with the trophy – before rounding off the season against Brighton and Southampton.

City boss Guardiola said: “I’m happy that next Sunday we will receive the Premier League trophy and have the chance to be the best team in history in England, with the most points. We are going to try to do it next Sunday.

“To just be happy when you lift the title makes no sense. The numbers are facts, hopefully we will get one more victory and we will have 96 [points].

“You always have to play for something. Once we had won the Premier League the target is the numbers.

“The numbers we are going to achieve will not be easy. We will have to play good to break the record. It’s good to see something to fight [for].”

Guardiola is adamant that there will be no let-up from his players despite what looks a nice run-in as they pursue the records.

“Just like the last game against Swansea, we take it seriously and we respect the competition,” added Guardiola.

“Huddersfield, Brighton, Southampton, they deserve for us to be who we are all season. It wouldn’t be fair to them if we came down here for a holiday.

“We have to show