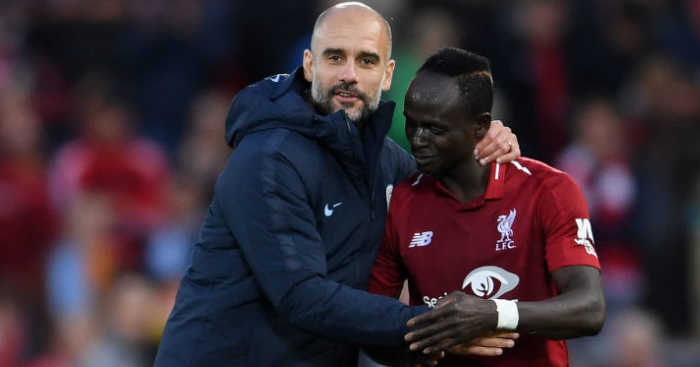 Pep Guardiola has urged his Manchester City side to rack up the goals in a Premier League title race that he believes could go right down to the wire.

The City boss not only thinks the Premier League could be settled on the final day of the season, but that it could come down to goal difference.

Champions City currently trail leaders Liverpool by three points but could return to the top – on goal difference, albeit having played a game more – with victory at Everton on Wednesday.

City’s goal difference stands at plus 46, five better than Liverpool’s, having scored 66 goals prior to the game at Goodison Park.

While the City boss refused to rule in-form Manchester United out of the title race, many pundits feel it is a straight battle between Guardiola’s City and Jurgen Klopp’s Liverpool.

Guardiola said: “The first message is to win the game and the second one is; if you can score, score and if you can avoid conceding, do it because maybe you could win the Premier League on goal difference.

“While we are not going to say to the guys today we have to win 25-zero – I never say that – first you have to win the game and then second try, because it can happen.

“I’m pretty sure the winner will be the last fixture or the last two. I’m sure of that.”

City have been reinstalled as title favourites by bookmakers following Liverpool’s wobbles in the past week. Jurgen Klopp’s men have looked nervous in successive 1-1 draws against Leicester and West Ham.

during the FA Cup Fourth Round match between Manchester City and Burnley at Etihad Stadium on January 26, 2019 in Manchester, United Kingdom.
But Guardiola is not reading too much into that yet, particularly with plenty more to occupy his mind this month.

Wednesday’s clash is followed by a visit from Chelsea on Saturday while February is further crowded by assignments in three other competitions.

City’s Champions League challenge resumes with a trip to Schalke, they face Chelsea again in the Carabao Cup final and there is also an FA Cup fifth-round tie to fit in.