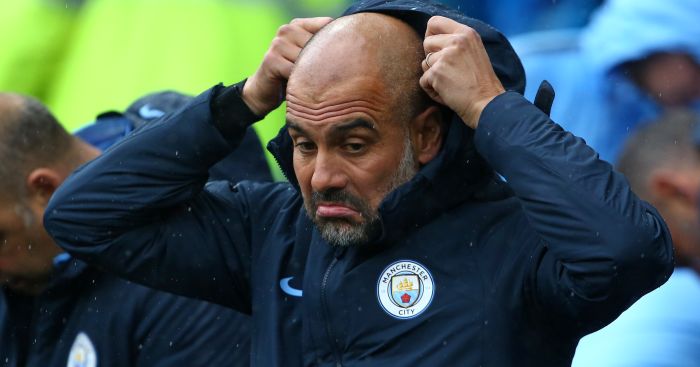 Pep Guardiola hailed Manchester City’s “exceptional group” after his players reacted to their midweek Champions League defeat by romping to a 5-0 win at Cardiff.

Guardiola was serving a UEFA touchline ban and sat in the stands on Wednesday when Lyon claimed a shock 2-1 victory at the Etihad Stadium.

But City bounced back in style with Sergio Aguero, Bernardo Silva and Ilkay Gundogan on target in the first half before Riyad Mahrez struck twice after the break.

“The managers are there when they have little doubts, to support them,” City boss Guardiola said when asked if his return to the touchline had helped his players.

“It’s the same group, they keep reacting, an exceptional group.

“They know how, when the situation is not good in terms of results, the closer I am to them.

“They deserve all my respect and that’s why I will always be with them.”

Cardiff survived for over half-an-hour in pouring rain before Aguero, who had signed a contract extension on Friday to remain at City until 2021, marked his 300th appearance with a crisp finish.

Silva and Gundogan ended the contest before the break before substitute Mahrez netted a second-half brace – his first goals since his record summer switch from Leicester.

“After a not-good result in midweek, we responded with the same level we had for the last 12 or 13 months,” Guardiola said after City had scored five or more for the 10th time in his care.

“The first 20-25 minutes is always complicated, not easy.

“But after one or two goals immediately it was easier.

“It’s important for him (Mahrez) to score, he’s an incredibly talented player.

“He deserves to play more minutes, like Phil Foden. But the season is too long and they have to be ready, prepared, because they are going to play a lot of minutes.”

Cardiff’s defeat was their heaviest during the two years Neil Warnock has been in charge.

They have yet to win since their return to the top flight and are now one place off the bottom.

“It’s very difficult for us against the top teams at the minute,” said Warnock, who expects to be without Lee Peltier for a “few months” after the defender suffered a suspected dislocated shoulder in the second half.

“So we have to make sure it counts against the other 13 teams we play.

“That’s where we’re going to get our points.

“These games are not going to define our season but it will knock our chin on the floor a bit.

“The lads have got to get over the weekend and get on with next week.”