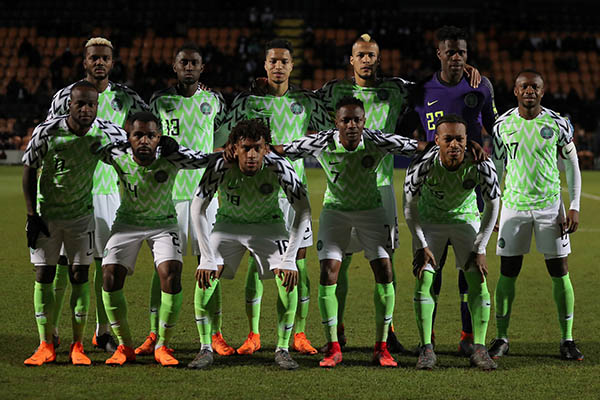 Nigeria manager Gernot Rohr is presumably in England to check on the progress of some of his key players, a month before he announces his eagerly anticipated provisional roster for the 2018 World Cup.

Though it is unclear if the German was at the King Power, Emirates and Stamford Bridge stadiums this past weekend, one of his scouts based in London Tunde Adelakun would have monitored one of the two matches that involved Chelsea right wing-back Victor Moses and Arsenal starlet Alex Iwobi.

The other English-based stars in contention to make the 35-man list are Leicester City pair Kelechi Iheaancho and Wilfred Ndidi, who were not in action in the last round of matches, and Hull City’s Ola Aina

Rohr and his lieutenants are scouring England and other parts of Europe for a striker to solve their goal-scoring problems, with the Super Eagles scoring only one goal, which did not come from open play, in the March friendlies.

”Rohr is disappointed with the performance of his team in the last two friendly matches claiming they were only lucky against Poland,” a source told New Telegraph.

”Right now Rohr is England and other parts of Europe to check on the form of the players he would use in prosecuting the remaining warm matches.”

This website understands that Rohr takes scouting seriously and has instructed his scouts to keep close watch on Nigeria’s Group D opponents Argentina, Croatia and Iceland ahead of the mundial.

The Super Eagles will face DR Congo, England and Czech Republic in warm up matches before their trip to Russia in June.