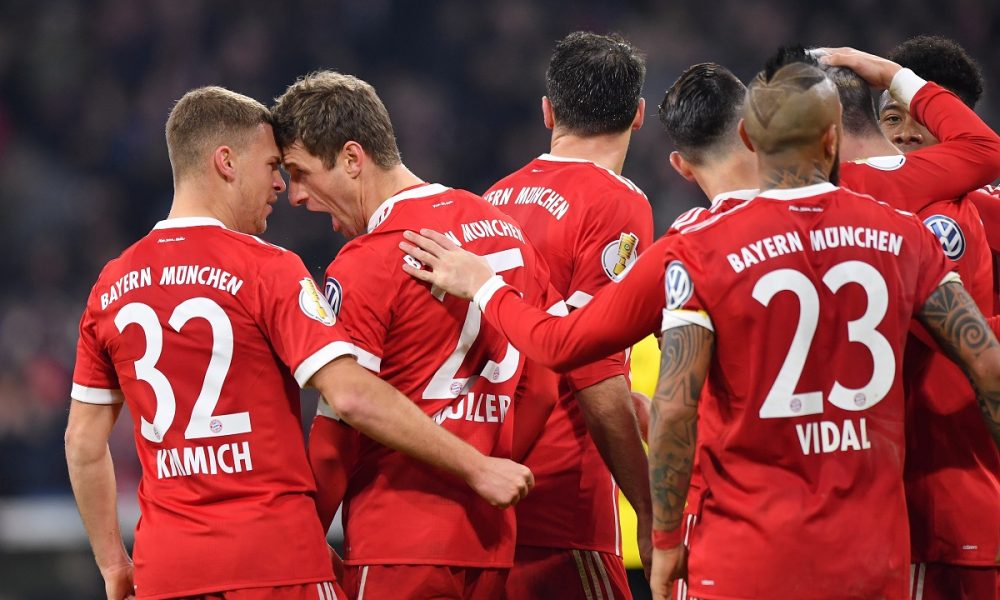 For years, the German League has been trying to market the matches between Bayern and Dortmund as a kind of “German Classico” and regularly schedules the return leg for April. Year after year, however, the hope of a showdown for the Bundesliga crown is dashed by the fact that the title fight has long since been decided. What became clear in their current edition of the duel, however, is that this year the Black and Yellows are not only over the entire season but also punctually not in a position to be a serious competitor for the Reds.

Even before the match, it was clear that the major tests for the FCB would take place on Tuesdays and Wednesdays in the upcoming weeks. Jupp Heynckes would have had the comfortable opportunity against the BVB to give some players a breather three days before the away game in Sevilla, which is extremely important for the rest of the season. The dip in Leipzig and the international break made it advisable to use the game against Dortmund to regain rhythm and self-confidence.

And so Heynckes – apart from Kimmich, who had to run over 90 minutes twice last week due to a lack of alternatives in the national team – offered the best possible team in his opinion as announced at the press conference. When Vidal returned banged up from the international break, Müller moved from the wing to the middle. His position on the right flank was taken by the recovered Robben.

In case you missed it
Even before the match, the presence of Javi Martinez, James & Müller in the centre suggested that FCB had no intention of patiently setting up BVB with a fine combination game and elaborate passing schemes.

And indeed, from the beginning, the game was focused on a directness and verticality that was striking in comparison to the years under Guardiola.

This was symbolized by the creation of the first goals: After a BVB throw-in at the midline, the conquered ball is played vertically to Müller, who in turn finds Lewandowski with a trough ball (1:0, 5.). Also James’ 2:0 (14.), Müller’s 3:0 (23.) and Lewandowski’s 4:0 (44.) were the direct result of an interception that resulted in direct and rapid attacks.

When Ribery turned a beautiful combination with the outstanding James into the 5:0 (45.+1.) with an amazing chip, the game was not only decided long ago. There was a class difference between the two teams and the BVB was lucky that in the second half Bayern were only interested in not having to invest too much energy in view of the game on Tuesday. And so Lewandowski only added another goal (87.) after Kimmich, who came in at half-time, combined with Müller over the right wing.

1. Memorable midfield
To avoid having to build up the game via Javi Martinez, the active James dropped deep in possession and was the initiator of most of the attacks. He obviously tried not to delay the game and to play as few lateral passes as possible. The mix of risk & security was right. The set-up with Javi also worked very well; when James dropped, Javi moved forward as a vertical relay station and made it difficult for the opponent’s double six.

2. Thomas Müller at his best
Thomas Müller in this form is a weapon that no other club possesses. With his generous but well thought-out running, he covers two positions at the same time, creates numerical advantages in midfield and advances into the depth as the second striker. By occupying the right wing, he prevented the isolation and double teaming of Robben, formerly practised so effectively by the BVB under Klopp.

3. Controlling the tempo
The team knows how to vary the pace. Ball possession phases were interspersed again and again as a kind of pause for breath, speed and pressure were increased in a flash with vertical play and aggressive counter-pressing. It is also remarkable how it was possible, despite the dominance over the BVB, not to compress the opponent and thus to leave room for ones attacks.

4. Ribery has arrived in the season
Does Ribery still have it in him for one final dance? His appearance in the first 45 minutes raises hopes that seemed to be buried after Coman’s injury. Like in his best days, he went past Piszczek before the 4-0, the chip for the 5-0 was fantastic. As useless as ever, however, then again his aggression towards Weigl in the 2nd half.

5. The role of the BVB
The only thing that could be criticised is that the frightening level of the BVB may put Bayern’s performance into perspective. Defensively, the rare counterattacks in the center sometimes opened up large gaps that Javi Martinez can barely cover on his own. Whether a better opponent would have exploited these gaps remains to be seen in the Champions League.