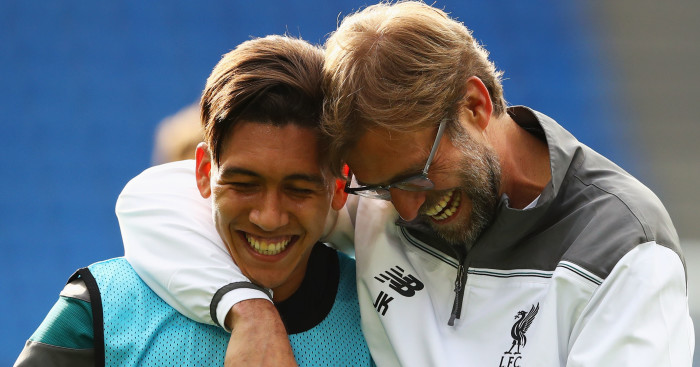 Jurgen Klopp insists Roberto Firmino had nowhere else to go after talking up the Brazilian’s merits and promising he will not be the last player to commit his long-term future to Liverpool.

The Brazil international agreed an improved five-year contract on Sunday and it is expected the likes of Sadio Mane and Mohamed Salah will follow suit as Klopp looks to tie down his major stars.

Firmino has been overshadowed by Salah’s incredible goal-scoring exploits this season, but is arguably the team’s most important player and his value to the club is reflected in his new contract, estimated to be worth £160,000-a-week.

“This is one very important step, absolutely,” Klopp said.

“But even Roberto cannot play alone. We need to carry on in this way.

“In the moment every player knows about our plans. He’s the first (to commit), but for sure he won’t be the last.”

Firmino has scored 27 goals this season, but it is his all-round game which has helped the team flourish.

It has taken the Premier League a while to catch up to the crucial job he does, but Klopp said it was never in doubt within the walls of their Melwood training ground.

“This constant discussion about whether he’s under-valued or whatever in public, this never happened for one second either in the club or in the team,” added the Reds boss ahead of their Champions League semi-final second leg against Roma.

“He knows and appreciates absolutely this club. The other boys really respect him for all the work he’s doing.

“He feels completely comfortable and is planning for the long term here.

“That’s becoming rare because if you are not Barcelona or not Real Madrid then there’s usually another club somewhere you can go to.

“It’s really good news for us. He’s absolutely a big factor in our future.”

Firmino plays in a seemingly carefree way with a smile on his face but rarely fails to turn up in the big games and Klopp appreciates that.

“He’s a footballer, from his head to his toes,” said the German.

“He enjoys playing football and he’s not bothered about hard work, which is another important thing.

“Because Millie (James Milner) didn’t play the last game from the start, Roberto had the highest distance covered. For an offensive player that is pretty rare in world football.

“I often think that, because he doesn’t give himself a rest, I have to do it from time to time. That’s all good and how football should be.

“You play it because you have the opportunity to make your mates better and they help you to become the best player you can be. It’s as simple as that.

“I am happy to have Roberto around – he’s just a good boy in the dressing room. It’s perfect news.”