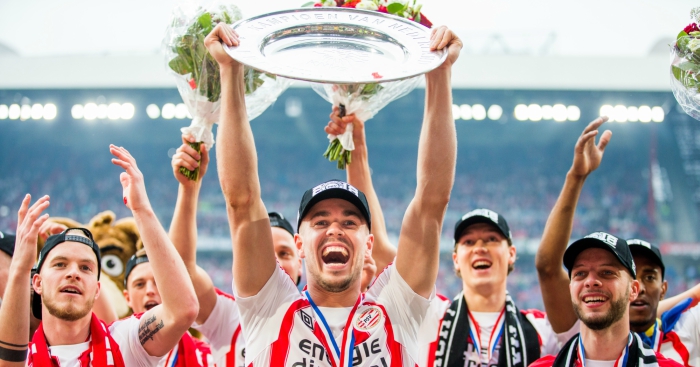 Chelsea have once again sent a busload of their most talented youngsters out on loan this season – but how have they all been getting on?

The club currently has 38 players out on loan at various clubs in places as varied as Middlesbrough and Mexico.

We’ve taken a look at each Chelsea player currently out on loan, including a league-winning captain and a club’s player of the year.

Tammy Abraham
After scoring 23 goals in the Championship on loan at Bristol City last season, Abraham moved up a division to join Swansea last summer.

This term, he has grabbed five league goals in 15 starts and 13 substitute appearances but has been unable to hold down a regular place in a struggling side.

“I think for him this season is very important for his development,” Chelsea manager Antonio Conte said.

“Then we’ll see for the future, what will happen. For sure, Tammy is a Chelsea player and it will be an important player for the future.”

Ola Aina
One of three Chelsea men on loan at Nigel Adkins’ Hull City, full-back Aina has made 42 starts in the second tier so far this season.

Having switched allegiances in March 2017, Aina has made his international bow for Nigeria this season, and could line up against England at Wembley as both nations prepare for the World Cup.

Victorien Angban
On his third season out on loan, midfielder Angban is currently at Belgian second division side Waasland-Beveren, making 28 appearances so far in a season that bizarrely comes to an end with a play-off competition to qualify for the Europa League.

Baba Rahman
Left-back Baba hasn’t played for Chelsea since his debut season, joining from FC Augsburg in 2015. He failed to impress new manager Conte the following pre-season, and joined Schalke on a season-long loan.

In January, he returned to Schalke on an 18 month temporary deal, but he has still not played a first-team game since rupturing his ACL in last year’s Africa Cup of Nations.

He made 10 appearances early in the campaign before sitting out 25 matches in a row, much to Chelsea supporters’ frustration.

Michy Batshuayi
After joining Chelsea for £33million in 2016, Batshuayi has started just four Premier League games, with Conte even favouring playing Eden Hazard as a false nine over his fellow Belgian.

He has proven his biggest doubter wrong, for sure, scoring seven times in 10 Bundesliga appearances before injury ended his season recently.

Nathan Baxter
Goalkeeper Baxter has impressed on loan this season at Woking, earning a new contract at Chelsea in the process, despite his side’s relegation from the fifth tier.

Mitchell Beeney
Another stopper, Beeney joined League of Ireland club Sligo Rovers on loan in February, leaving father Mark behind, with the former Leeds goalkeeper currently working as a coach at Chelsea.

A summer league, Beeney has joined Sligo until June 30, and has made seven appearances so far.

Also in the Championship, left winger Boga has scored twice and added two assists for Birmingham as they battle against relegation.

Jake Clarke-Salter
Clarke-Salter has been an unfortunate participant in Sunderland’s horrific drop straight into League One, after it was confirmed that they would finish bottom of the Championship at the weekend.

He joined the club in January, but appearances have been hit by two successive red cards, in the derby against Middlesbrough before another in his return against Preston.

Bradley Collins
Collins has kept seven clean sheets during his season on loan at League Two side Forest Green Rovers, in his first taste of senior football.

Fankaty Dabo
Versatile defender Dabo is one of the Chelsea contingent on loan at partner club Vitesse, after making 15 appearances at Swindon Town last season.

The former FA Youth Cup and U21 Premier League winner has made 26 appearances in the Eredivisie this season, and received a lot of attention when he scored an incredible 35-yard own goal

Jay Dasilva
Dasilva is currently in his second spell on loan at Charlton, spending the second half of last season with the Addicks, before rejoining on a season-long loan last summer.

The defender has made 51 appearances at Charlton, and in 2015 Ian Wright said he was “better than any Premier League left back” after his performance in the UEFA Youth League final.

Matej Delac
Despite never playing for the club, Delac is currently Chelsea’s longest serving player, on his 10th different loan spell away from the club.

However, that will come to an end this summer, as it was announced he will join Danish club AC Horsens when his contract expires.

Michael Hector
After arriving from Reading on deadline day in 2015 and being immediately loaned back, 25-year-old Hector is incredibly in the 14th loan spell of his career, this time at Hull. The Jamaica international has made 35 Championship appearances this term.

The initial six-month loan this season was extended in January, after Doncaster’s failed bid to make the move permanent.

Tomas Kalas
Kalas is in his second season on loan at Fulham, after two years on loan at Middlesbrough. Having joined Chelsea way back in 2010, he actually made his Premier League debut in *that* match at Anfield in 2014.

The defender impressed supporters recently with a brilliant run to set up Aleksandar Mitrovic in an away victory at Millwall.

Todd Kane
Another long-serving defender, Kane has scored three goals in 16 appearances on loan at Oxford United this season.

Kenedy
A promising transfer in 2015, Kenedy has spent this season on loan at Newcastle with supporters keen for him to stay at St James’ Park.

Ruben Loftus-Cheek
Injury to Alex Oxlade-Chamberlain might just have propelled Loftus-Cheek back into contention for England’s World Cup squad, after impressive performances for Crystal Palace saw him earn his international debut earlier this season, before injury kept him out for a sustained period.

He has made a seamless return to action, though, and pulled off this nice nutmeg on Riyad Mahrez at the weekend.

Matt Miazga
Miazga joined Chelsea from New York Red Bulls in 2016, and after a handful of appearances has been on loan at Vitesse ever since.

Mason Mount
Also at Vitesse, Mount, 19, has recently been handed the club’s Player of the Year award having notched nine goals and eight assists in the Eredivisie.

Charly Musonda
In a similar situation to Baker at Middlesbrough, Chelsea supporters are frustrated that Musonda is strugging for game time at temporary club Celtic.

He has made just six appearances across all competitions since joining on an 18-month deal in January.

Nathan
After struggling for game time at Amiens at the start of the season, the Brazilian attacking midfielder in January switched to Portuguese side Belenense, where he has featured 11 times so far.

Kenneth Omeruo
Omeruo has made over 150 appearances since joining Chelsea from Standard Liege in 2012, though none of those have been for the Blues.

Having spent time with Middlesbrough among others, Omeruo is currently in his second spell with Turkish club Kasimpasa, and will almost certainly line up for Nigeria at the World Cup.

Kasey Palmer
Palmer started the season with Huddersfield after helping them to promotion to the Premier League last season, but after only a handful of appearances he dropped back into the Championship to join Derby.

However the struggles have gone on, and Palmer has started just twice at Pride Park, appearing 13 times off the bench.

Danilo Pantic
Joining Chelsea from Partizan Belgrade in 2015, Pantic is now back at his former club on loan after two seasons in the Eredivisie with Vitesse and Excelsior.

Mario Pasalic
Pasalic has spent time on loan at some huge clubs, winning the Coppa Italia at AC Milan after a spell at Monaco, and he is now at Spartak Moscow.

The 23-year-old midfielder has made 19 appearances in the Russian Premier League this season – scoring four goals – though only eight of the appearances have come from the start.

Lucas Piazon
Piazon threatened to break into the Chelsea first-team after being named Young Player of the Year in 2012.

After spells in Spain, Holland and Germany, he is now in his second season at Fulham, scoring 11 goals in all competitions.

Josimar Quintero
Ecuadorian midfielder Quintero moved on loan to Real Betis B in January but has amassed just 75 minutes on the pitch in six appearances from the bench.

Joao Rodriguez
A familiar tale, the Colombian attacker is currently with his eighth different club since joining Chelsea aged 16 in 2013, currently with Mexican club Tampico Madero.

Jared Thompson
Thompson has spent this season on loan at National League South side Chippenham, earning a new contract a few months before his 19th birthday.

Fikayo Tomori
Tomori partnered Clarke-Salter in England’s fantastic Under-20 World Cup win in the summer, joining Hull on loan for the season, where he has played 24 times and progressed up to England under-21 level.

Marco Van Ginkel
After a successful season on loan at AC Milan, Van Ginkel was loaned to Stoke as part of the deal that took Asmir Begovic to Chelsea.

However that was cut short in 2016 and the midfielder joined PSV, where he has been temporarily housed ever since, and was in fact handed the captaincy ahead of this season, which has ended with them winning the Eredivisie title.

Ike Ugbo
After struggling in the Championship with just one goal in 15 appearances for Barnsley last term, Ugbo has managed just two in 14 for League One strugglers MK Dons this term.

Charlie Wakefield
Wakefield has failed to make an appearance on loan at Stevenage this season, having signed a new contract in August.

He hit the headlines in March last year after buying his dad a Jaguar for his 50th birthday.

“He deserves everything and I can’t thank him enough. Everyone I know loves him,” he said.

Kurt Zouma
After three years in and around Chelsea’s first-team, Zouma failed to make the step up and replace John Terry, and was subsequently loaned to Stoke last summer.

He has made 32 appearances for the Premier League strugglers so far this season, though he agreed a new five-year deal before moving on loan.