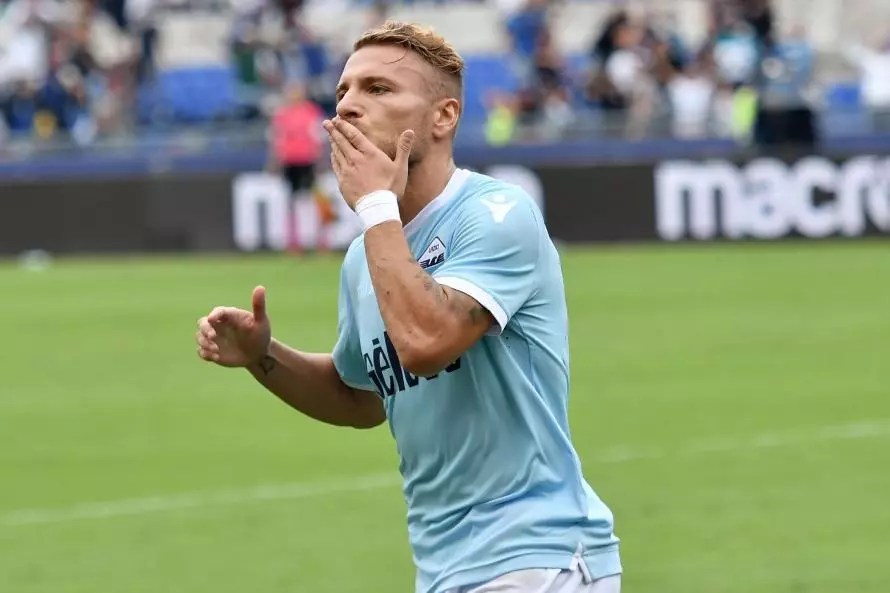 The 4-2 scoreline of last week’s fixture between SS Lazio and FC Red Bull Salzburg at the Stadio Olimipico, whilst somewhat flattering to I Biancocelesti, was by far the most exhilarating tie of the Europa League games last week.

In this return fixture at the Red Bull Arena in Wals-Siezenheim, Salzburg need to keep Lazio at bay; the ideal situation being to score two goals without reply to guarantee passage into the Europa League Last Four. The two away goals they snatched in Rome means that Lazio manager Simeone Inzaghi will be wary not to rest on his laurels. Valon Berisha and Takumi Minamino’s strikes are more than consolatory, and could prove to be detrimental in securing Salzburg entry into the semi-finals of the Europa League.

It was captain Stefan Lulic who struck for Lazio after just eight minutes in their home game. At the half-hour mark Salzburg were awarded a penalty thanks to the flailing arms of Dusan Basta catching Munas Dabbur, and Berisha’s conversion, his fifth goal in this year’s competition, meant the teams were level going into half-time.

The latter 45 minutes may have been the most exciting second half in any of Europe’s premier ties last week. Right after half time, Marco Parolo misdirected Salzburg goalkeeper Alexander Walke with a beautifully intelligent back-heel finish to sway the advantage back to the home side again.

Salzburg, 2-1 down, showed remarkable fight and substitute Minamino was on the pitch for less than a minute before temporarily convincing manager Marco Rose that Salzburg might be leaving Rome with an admirable draw.

There is however, one person who is synonymous with Lazio right now, and who else but Serie A top scorer Ciro Immobile to step up to secure Lazio’s first leg claim? Less than two minutes after Felipe Anderson’s third goal to put the home side once again ahead, the Italian striker slipped the ball under goalkeeper Alexander Walke’s legs, sending the tie out of Salzburg’s reach, and rewarding himself with his fifth of the European campaign and an incredible 38 in 41 games in blue and white this season.

FC Salzburg’s loss to Lazio last week was only their third of the season, and Die Roten Bullen immediately followed their first since mid-January with, surprisingly, their fourth. The 1-0 defeat to Linz saw top striker Moanes Dabour benched, coming on for the final half hour. Dabour, despite providing the assist and gaining the penalty, had a relatively quiet game in front of the Lazio goal last Thursday, and Salzburg will want their top-scoring Israeli to be firing tonight.

Interestingly, last week’s penalty-scorer Berisha has bagged more goals in European competition than in the Bundesliga. He has scored four in four Euro nights, and was rested for the domestic fixture at the weekend. The lack of pressure on the aesthetically-pleasing Salzburg within the Austrian Bundesliga- they are eight points clear of Sturm Graz with six games remaining- means that Marco Rose’s focal point is firmly on getting his team to reach their first Europa Final since 1994.

The 2-1 win over Udinese at the weekend means that Lazio are undefeated in seven, yet they have only managed to keep a clean sheet in just one of these games, away at Dynamo Kiev in the previous round of the Europa League. Stefan de Vrij is the peerless Dutch defender in a lot of managers’ eye-lines and, with his contract coming to an end in the summer, his exit may be softened with the return of some silverware for the club. He will be expected to produce an outstanding defensive performance tonight to stifle Salzburg out of the match.

Similarly Sergej Milinkovic-Savic has been attracting a lot of attention, namely with Manchester United. The midfielder has scored 11 goals and provided seven in all competitions this season and maintaining integral performances that may lead to the final at the Parc Olympique-Lyonnais will considerably raise his value.

What might buoy Salzburg slightly is that, while they may be cruising to their fifth consecutive Austrian Bundesliga title and can focus solely on progression in the European competition, Lazio have a far trickier immediate run. A week of consecutive cruel fixtures starts on Sunday, in what may be the game of the Serie A weekend when I Biancocelesti welcome Barcelona-slaying Roma, followed by a difficult away game to Fiorentina three days later, and then a return game at the Olimpico against Sampdoria.

Whilst Simeone Inzaghi has insisted that his priority is the Salzburg game, he can be forgiven for casting his eye further into the future in the pursuit of a domestic top four finish. A Roma win in the Derby Capitolino, with Internazionale taking three points from Atalanta could see Lazio descend from third to fifth. There may be a real onus on Lazio making their way to Lyon to secure Champions League status next year, and will have learnt not to underestimate their Austrian opponents.

In the wider spectrum, for the football romantic in a week of brilliant European football, who could refuse the opportunity to see Lazio lifting the Europa League on 16th May, only to see their perennial rivals Roma win the Champions League just ten days later? Surely Italian football will well and truly have returned.